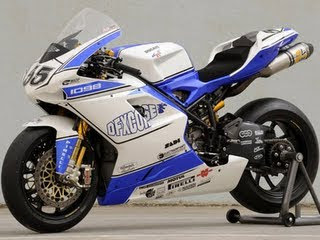 Spending way too much time inside this weekend, as hey that bright yellow thingy has been popping in ‘N out of the clouds this afternoon … After another rainy Northwest day yesterday…

I found it entertaining to note the wide variety of racing series on le Telescreen, as there really are other series already competing besides that ever so present Danica Patrick and her 2010 World Tour, as surprisingly I watched my very first ever “Aussie” V8 Supercars event yesterday from none other then Yas Island and the Yas Marina circuit, which previously held the very last round of the 2009 Formula 1 Championship in Abu Dhabi.

Then today, while probably everybody Up North Eh! In “Oh Kana-Duh” was watching some ‘lil ‘Ol Hockey game in Vancouver, BC eh? I accidently tuned into the season opener of the World Superbike Championship, (WSBK) coming from Down Under on Phillip Island in Austraila, Mates!

And those riders are simply BONKERS! As maximum velocity was reached by none other then Max Biaggi, who twisted his Aprilia’s throttle to an amazing 320kph… (As in 198.72mph!) CRIKEY’S!

Yet it was the 26yr old Englishman Leon Haslam leading away from the front in Race 1, having scored his first ever WSBK SuperPole, as Haslam streaked away with the two factory Ducati Xerox riders of Michel Fabrizio
And Noriyuki Haga nipping at his heels as the trio sped away from the pack, before Haslam aboard his Alstare Suzuki led from wire to wire and defeated Fabrizio in a photo finish of 4-one thousand’s of a second!

And it was entertaining to hear how Haslam was punching a hole in the air for the trio of riders at 297kph, while Haga in third was benefitting from the draft while cruising about at 305kph! With Biaggi blistering the field while chasing the leading group with an astounding 316kph, SHEISA!

Yet I missed the majority of Race 2 due to a TV Guide hiccup which claimed it was the WSBK Boyz at Silverstone next, (Huh?) so I went for a walkabout instead, returning “Just-in-Time” to see Race 2’s final four laps with Haslam Leading once again, albeit being stalked by Carlos Checa riding for the Althea Ducati Team alongside his aptly nicknamed teammate, Shane “Shakey” Byrne.

Yet apparently the crafty 38yr old Spaniard had been saving his tyres and on the final lap with just three corners remaining, Checa made his move and powered past Haslam to claim his first victory of the season.

And Oh yeah, I failed to mention the AMA Supercross race from Atlanta, Georgia last night, where Ryan Dungee won his third race of the season…
Posted by Tomaso at 5:07 PM