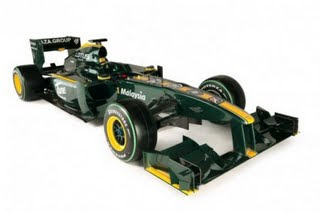 And then there were eleven Formula 1 constructors having rolled out their brand new shiny Racecar’s for the fast approaching Grand Prix season… As the newly reborn Lotus F1 Racing Team launched its 2010 Challenger, the Lotus T127 in London last Friday night to a crowd of some 500 strong, including Sir Stirling Moss and ‘BLOODY NIGE, a.k.a. Nigel Mansell.

The Mike Gascoyne penned Lotus Cosworth was actually shaken down by Malaysia’s Fairuz Fauzy, the Team’s Test/Reserve Driver, at Silverstone prior to the ritzy launch and the T127 model apparently borrows heavily upon Lotuses traditional colour scheme, while I’m certain that the squad’s Racing Drivers Jarno Truli and Heikki Kovalainen are itching to get down to work this coming week in Jerez…