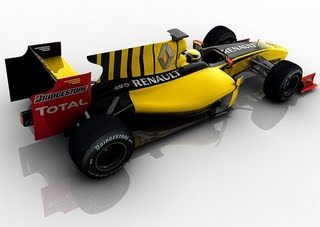 The “Reggie” broke cover on its new R30 Racecar at Valencia, displaying a newer shade of yellow, harkening back to the auto manufacturers days as a true Constructor during the late 1970’s – early ‘80’s with its yellow ‘N black livery.

Also breaking cover at the new launch was the much anticipated signing of the Team’s second Driver, as Renault saw fit to go with Rookie Vitaly Petrov, who’ll be the very first Russian to race in Formula 1… And it didn’t hurt either that he reputedly comes with a $21m cheque!