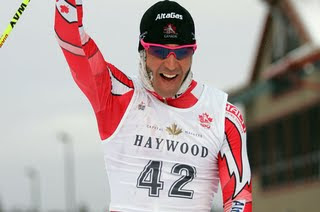 Whale I’m certain there’s more then just these two fine Athletes who’ll be contesting this years Winter Olympics Up North Eh! (Vancouver, BC) Even if Mother Nature continues to wreak havouc upon the ski slopes, yet these two men have an added burden towards their pursuits of winning Gold as one is Blind and the other has a major vision disorder, of which I’ve scribbled ‘bout previously in,

As Steven Holcomb and Brian McKeever will be of particular interest to me, since after all I share a common bond with these athletes by being visually impaired. (Instead of the athletic part, eh?)

Thus I’m not sure which of these two athletes I’m more impressed by, as American Holcomb drives a Bodine Bobsled notoriously nicknamed Night Train which is currently shredding the World Cup Bobsledding Championships at up to speeds of 100mph while enduring forces of 4G’s.

Meanwhile “Kuh-Nuck” McKeever is busy combating the glare of snow while attempting to navigate the cross country course solely by memory, as McKeever has only 10% of his vision remaining, enroute to becoming the very first ever athlete to compete in the Winter Olympics and Paralympics at the same time.

And although Holcomb suffers from Keratoconus and had experimental surgery performed to correct his impending vision loss, it’s McKeever who suffers from Stargardt’s Disease that I’m way more impressed by, as he qualified for his Canadian Olympic Team berth by winning a 50k Qualifying race unaided!

So keep an eye out for these two athletes performances, as Holcomb definitely has a shot for Gold, as I find it quite amusing how Holcomb now needs to keep his helmet’s face shield scuffed ‘N dirty since he was actually seeing too much!

UPDATE:
Shortly after posting this story I learned of the tragic death of 21yr old Georgian Luger Nodar Kumaritashvili in a training accident prior to the Winter Games Opening ceremonies, which I didn’t bother watching, as I still find it very hard to comprehend why there was NO padding on the exposed steel poles surrounding the ultra high speed sliding track’s finish, where competitors were reaching speeds nearing 100mph! As his unnecessary death made me think of Jeff Krosnoff’s unfortunate accident many moons ago…