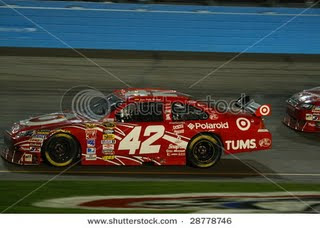 Apparently The Cheepster, nee chip Ganassi, was busy celebrating his recent Roundy-round DayToner 647 victory, along with perhaps combining a little business with some pleasure? By beating the ALL YUHS NEEDS TO KNOW – BY GUMMIT! IS WHAT I TELLS YUHS… World Tour over his much ballyhooed Delta Wang thingy-muh-jig… Err excuse me rocket Sledcar!

As according to TSR this past Sunday evening, Chip suffered a couple of broken ribs whilst navigating the powdery stuff skiing. Mmmm…. Sprinkles! Although there was no word upon where it happened or if Messer’s Kalkhoven ‘N George were present?

And NO! I have NOT changed my tune upon the Delta Wang (Putang) thingy ‘Juan iota… Nor do I intend to, as it simply DEFEATS the purpose of what Open Wheel Racing is supposed to be… As in FOUR ‘COUNT-EM 4 OPEN/Exposed majik rings… Preferably black rubber without any gimmicky sidewall colouring, which is making it hard for me to know what to think over the initial reports about the BAT project…

Yet I do have to say that the related image by an unknown source in Pop Off valve’s story is somewhat more palatable then the original Flying V Tricycle shaped Klingon-mobile.

As Y’all will never guess what the Topic du Jour was on last week’s Trackside with Cavin ‘N Kevin, on which I had to pull the plug as it got overly dronish on trying to Pooh-Pooh the Naysayers over the Delta Wang thingy… As how many covered wheels belong visible on an Open Wheel Racing Car?

Can you say ZERO!

As the more people I hear trying to be overly neutral, nee PC over Chip’s Delta Wing project, the more I conjure up images of a PIG with lipstick!

Yet interestingly, Cavin pointed out that one of the few current ICS Team Owners who wasn’t onboard the Good Ship Ganassi, was none other then a one Mr. Roger Penske, so it would be interesting to know just exactly how many Team Owners really were behind the Cheepster, as in behind this project and not On track as Cavin coyly noted.

Yet I still DON’T get-it??? As in the need to SCREW-UP Open Wheel Racing by picking some Buck Rogers Podmobile Phalanx LSR contraction to continue racing in 2012… I mean if it’s so necessary then why HASN’T Formula 1 felt the need to implement some sorta futuristic tricyclemobile, eh? Or put a myriad of florescent lighting on their racecar’s sidepods?

You can read my elongated thoughts upon the Delta Wang thingy here,
So what really is the story behind Project Delta Wing?

Then again, BEWARE! I’m ‘Juan of ‘Dem 40yrs Olds Somethings-aruthers with a Confuzer… Not to mention being a verrittble ‘Vurd Botcherer, nee Blogger! So uze may wannas consults your neighbor’s 10yrs olds insteads, eh? As who knows, perhaps young Johnny will be more enlightened on the matter… If his Pappy is willing to take him to the racetrack?
Posted by Tomaso at 9:05 AM