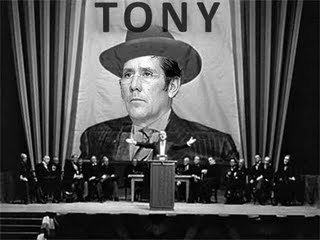 (Citizen Tony; Source: Is it May Yet.com)

By now Y’all have heard the news that Vision Racing has Suspended Operations according to former IMS Lynchpin Anton Hulman "Tony" George… Who claims its one of the toughest decisions he’s had to make… (Yeah Right!)

And I’m not gonna go into the whole sorted mess, as Y’all may recall that I’m ‘Juan of ‘Dem Jaded Crybaby CART Diehards… (That ‘Juan’s for uze Mr. Defender…) As I’ll admit for years, along with the first few of this Award Winning Blogsite Tony G was affectionately known as ‘lil Napoleon, which in some aspects he will always be! As C’mon, you don’t walk into Mr. Steinbrenner’s Office and say Gimmee! Or perhaps tell Mr. Davis “You’re Fired!” Since your Raiders Suck…

No, I could spend countless (pointless) hours here poondin’ meeze nucels Bloody and NOT getting’ anywhere’s, eh? As I think I enjoyed Will’s take on the whole sublime He’s Gone shebang as the headline itself is priceless.

A Man without a Vision is Blah-blah-blah

And as a growing theme seaming to emerge upon the Blogosphere… I only feel sorry for those 16-22 Employees who stayed at Vision Racing to the bitter end; as yeah I know it’s technically NOT Dead, BUTT! Hey if tony cannot land a sponsor or keep his ‘lil ‘Ol racing team afloat, then?

Meanwhile George over at Oil Pressure has a pretty good outlook on the whole Tony G Debacle… Even if I have a few disagreements with his article; namely the part about Formula 1 rejects… As I fondly nicknamed Tony’s Roundy-round Sandbox the Indy Retirement League, as in where do CART Drivers go when they can’t cut the mustard, eh? (Can you say ‘Lil Al ‘N Mikey?)

And although I’ve never met her or interacted with whom THE ‘DAWG calls the Pr Goddess, a.k.a. Pat Caporali, she’s just one example of the carnage Messer George has inflicted.

As the Misses Caporali has had a most interesting Motorsports career,
Having Begun with Players/Forsythe and moved to TCGR before taking up a very short lived career as Director of Media Relations for CCWS… Remember them? As in Champ Car World Series, a move she made in late Twenty-Oh-Seven just months prior to Tony’s TAKEOVER, Err Mergification thingy…

So I found it most ironic to finally hear Pat’s voice via Autosport Radio just weeks ago while Mr. George was outta the Country, Err that’s right he was off skiing with some other Bright, Shiny Faces while Pat towed the company line saying the lights are still on and the doors are still open at Vision Racing.

Yet even better yet, I especially enjoyed Edward “F-Bombs R-Us “Carpenter’s statement: “I DON’T know exactly what this means…” Whale Bubbah I think it means you’re outta a Fulltime gig in IndyCars, Yuh Think? (And Daddy’s taken away the keys to your Hot Rod Lincoln…)

But my how the Tide’s shifted as I actually sat screaming at the Telescreen GO ED! GO ED! GO ED! GO ED! GO ED! GO ED! In that Barnburner Ovalfest held in Kentucky last summer… I mean GEEZ! How many millions of us CART/Champ Car Diehards would ever be rooting for Tony G’s Indy Car Team to win… Especially against The Captain, a founding pillar of our be-LUV-ed racing series; even if he defected after seeing the writing on the wall… Which I blindly failed to acknowledge by continuing to support Cart and then Champ Car, as George notes, the reason Roger is so successful is because he runs everything as a Business!

So, NO! I absolutely have NO regrets/sympathy for Mr. George’s current state of affairs, as he’ll always be the instigator of Open Wheel Racing’s demise… As it really was a TAKEOVER and NOT a Merger, but then again, before you go off feeling too sorry for Tony, just remember that he was off swishing down the slopes in Austria with some dudes named Kevin Kalkhoven & Zak Brown… Which makes me wonder if he really was doing everything he could to land some potential sponsors for his race team? Or simply wiping his hands completely of any ties to his Sisty-Ugliers instead…


Thus will the Ovalheads simply pine for the good ‘Ol Tony George Dazes in the future like us CART-Ophiles dooze ‘bouts Open Wheel Racing? As perhaps tony’s successor can lasso some larger slice of the Motorsports pie instead, since the Tony George Era appears to finally be DEAD! Hmm? What’s that song; Ding dong the Witches Dead… Or is it I’ll get you my Pretty…

Meanwhile if you’re not aware of the call to Arms by the bloggaratzi; as in Sgt. pressdog, James the G-Mann & His name is Earle to name a few… As they try to muster their cadre of respective IRL followers to lead the charge in Vision Racings resurrection. then you may wish to check out the following inquiry.

Help Wanted
Posted by Tomaso at 8:55 AM