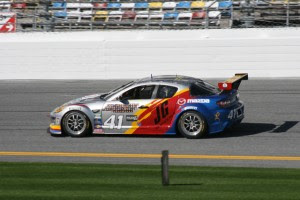 So ‘Monty “MAC” Montoya once again is puttin’ on a driving Clinique in this year’s Rolex 24, having just dusted off Lucas Luir in another typical display of his cold tyre mastery…. Puttin’ on a power move to take over P1 by going deeper, faster, further into the first turn… Even better yet, although I’m not sure if its just to spice up the TV coverage, but reportedly Luir was smokin’ hot after he got out from his driver change over Monty’s tactics, saying he gave him a WHAP! While runnin’ behind the Pace Car, to which Lucas said C’mon, I mean this isn’t CUP! WRONG Bubbah! MAC wants his third Rolex. As Dorsey Schroder had the best ‘Juan-liner so far sayin’ Montoya’s LUV-Tap was just like having Robby Gordon running behind you every lap!

Meanwhile I’m quite pleased with all of the Facetime Team Seattle’s getting due to some dude named Dempsey spearheading their efforts, as his No. 40 was up to 9th in class as SPEED went off the air… And as of Hour 6 the two cars were running in lockstep 22nd-23rd overall.

Meanwhile, there’s supposedly some sorta Bloggerthon going on over at the Furious Wedge… And although I’m not participating, I’m running my own sorta Madcap Marathon… As I’ve decided what better way to spend a Grey ‘N Rainy weekend by watchin’ ALL 16hrs of SPEEDS coverage via le Telescreen. As SPEED’s coverage picks up again tomorrow at 4AM PACIFIC; SHEISA!