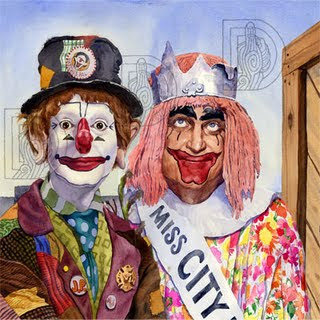 J.P. Patches and Gertrude
So originally I wasn’t gonna Bite after hearing this ridiculous sound bite from the lips of Curty cavin in his IndyStar Colum, as the news seems extremely PATHETIC! As really Indy Car? You’re gonna keep a female competitor from racing in your down on entrants racing series because she’s never run an Oval… Tsk-Tsk!

So props to my Open Wheel compadres ‘CAM-WOW & Ryan for scribbling ‘bout this, as Matt chamois most correctly points out how Indy Cars NEGATIVE view of letting Atlantics Standout Simona de Silvestro not compete in the Indy Racing League REAKS of Politics…

As in its ‘Juan ‘O our Competitors series and we AIN’T havin’ NO Atlantics Piloto’s show-up our vaunted ‘Flinstone Indy Lites Drivers… By Gumm-it! You’ll go thru our Ladder to Indy or Else Simona; Kapishe! (And that goes for you to Mr. John Edwards)

OTAY! Those were my sentiments and NOT Matt’s… While Ryan took a more PC approach to De Silvestro’s SNUB!

And I have to admit this is the very first article I’ve read from JP’s IndyCar Blog, of which I must admit that those initials make me think of a most legendary personality up here in the Pacific Northwest known as J.P. Patches… (But hey that’s a good thing JP; Hmm? That’s not Johnny Parsons is it?)

Which seems to sum up the whole You’re NOT Gonna race in our Premiere Series: DO NOT PASS GO, DO NOT COLLECT YOUR $200 until you properly participate in OUR Firestone Indy Lights series; Yuh Hear Simona? As JP points out how it might look a bit SAD if J.R. Hildebrand and ‘Bia (Ana Beatriz) cannot find rides in the Big Boyz while De Silvestro and Edwards are competing for the Bombardier Rookie of the Year: Can you say bombs Away?

And speaking of J.P. Patches… I’m wunderin’ if Brian I.H.J. Barnhart is perhaps auditioning for a cameo as Gertrude. Then again perhaps ‘Ol Braveheart uses his ICU812 TV Set to keep tabs on whoevers tryin’ to bust in on the IZOD Indy Car Party, eh?

I mean c’mon, if Milka-licious “N Marty “Geritol” Roth can be given the green light to race at the Speedway, then surely Simona deserves a crack without having to go thru this fowl smelling ‘DUNG HEAP Crackerjack-fest of NOT being Worthy, eh?

Then again how many licks does it take to get to the center of a Tootsie-pop? Or goodness gracious me? Could I just be crying some more “O those Crocodile CART Tears… But I thought The Split was over and Tony G. won? As after all it wasn’t a TAKEOVER, it was a Merger.

HE-LL! I even had to Google ‘DannaCar to discover that she had a most LIMITED amount of Roundy-round racin’ before jumping to the Big Leagues… As in she began in Go Karts, then moved Across the Pond to compete in British Formula Ford & Vauxhall, then back to Star Mazda and Toyota Atlantics, with only the latter running in conjunction with CART, Err Champ Cars few remaining Ovals. And where’d that Mike Conway come from?