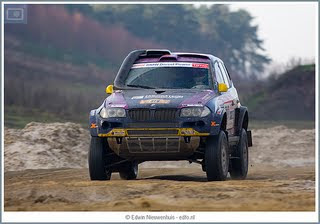 Err, perhaps that should be Sand, eh? As the Nations of Argentina ‘N Chile ring in the New Year with the 32nd running of the DAKAR… The world’s most intense long haul Rally, when the 184 motorcycles and quads, 136 cars and 52 trucks competing will be on display on January 1st during the event’s special Presentation Stage in Buenos Aires; as the prestigious “Car” Category victor’s will most likely come down to a shoot-out between what appears to be the only two factory backed Rally Raid squads: Defending Champions Volkswagen vs. BMW, while Robby Gordon’s Monster Hummer could be a Darkhorse? (6th Overall after Stage 1)

And by my very unofficial count… Hey you try reading 128 entries, eh? The vaunted Car class is quite an eclectic mix, with a menagerie of Cars, Pickem-Up Trucks, Buggies and SUV’s both large ‘n small… Why “HE-Double L!” There’s even a Mercedes Benz something-ruther taking’ part.

Thus, by rough count there’s four Factory BMW X3cc’s vs. five Factory VW Touareg’s. A total of three Hummer H3’s from the Robby Gordon Motorsport stable, with the third being driven by a South of the Border pairing, as the Chillie sponsored Hummer was runnin’ a bit too HOT-HOT-HOT! With a late stage incident causing minor damage to the windshield & mirror and ending up 39th overall.

Day Two’s Runner-up featured “El Matador” (Carlos Sainz) in his trusty Touareg, while lurking in third place was the King of the Desert; Nine time Dakar winner Stephane Peterhansel, who’s been hired to give BMW its best shot at overall glory.

Yet sadly, a 28yr old female spectator was killed along with four others being injured at the 75 kilometer’s mark, when a racing vehicle slid off course and struck the spectators in an “Out-of-bounds” non-permitted viewing area, becoming the Rally’s first spectator casualty in four years.

But I don’t know if Versus will once again cater to our wishes of providing a 30mins nightly recap this year or not? Since I couldn’t find anything on their annoying website, along with never getting an answer to my inquiry; alas, if anyone knows the answer to this, please leave me a comment…
Posted by Tomaso at 10:01 AM