Magnificent Desolation: An Astronaut's re-entry to life on Earth and Beyond...


For some strange reason, when I think of Christmas, somehow Toy Story inevitably creeps in, along with Ye Eggnog, twinkly lights, Reindeer, etc.

Oh Yeah, how could I forget that Buzz Lightyear was based off of the Second Man to ever step foot On the Moon - who subsequently cleared his cousin Buzz for flight aboard the Space Shuttle...

As I let Claudio randomly select six Audiobooks from Austin's wonderful Public Library for my entertainment during our "downtime" during my visit over the Grand Prix weekend. Since after all, what does a blind person do when he doesn't have his trusty assistant 'Lucy (my Screen Reader software) along for the ride...

Of the six choices, I mentally debated beginning with either Angels and Demons (for which I've now just finished the author's second tome, The Da Vinci Code...) or Magnificent Desolation: The Long Journey home from the Moon - and chose the latter since it was written by Edwin Eugene "Buzz" Aldrin Jr, Y'all know the second man to ever walk upon the Moon. For which I'd later learn that only twelve  men have ever done so!

As the choice seemed somewhat Karmic, Apropos, or Symbiotic since I'd looked up towards the Stars and ultimately spotted the International Space Station (ISS) for the first time ever - during the year of the 40th Anniversary of Apollo 11's landing upon said Moon.

Ironically, the ISS just celebrated its 15th Birthday of continuous human occupancy on November 2nd, when the current six Astronaut's celebrated the milestone some 250-miles above Mother Earth in their "tin Can."

Yet this story is about Buzz Aldrin, now currently the oldest living person to walk on the Moon, age 85 with one third of the hallowed men to set foot on this desolate surface being deceased. As Neil Armstrong, Charles "Pete" Conrad, Alan Sheppard and James Irwin have all died.

Although I don't wish to try chronicling the whole book, nor give I-T away. Nonetheless, I found myself A-L-L consumed with finishing this novel before returning home, which I never thought of until now, the Audiobook version I listened to appropriately was 11-discs long, a la the number of Buzz's Apollo 11 mission; Co-inky-dense?

As the book primarily deals with Aldrin's life after his momentous accomplishment and the subsequent "Blue Funk" that continuously attempted to ruin his life afterwards. Having fallen foul to deep clinical depression and Alcoholism. Ultimately hitting rock bottom when becoming a Cadillac Car Salesman!

But I simply couldn't stop reading; Err listening to thy book as Claudio would occasionally enter thoust living room and ask What's Buzz doing now? Or Tomaso, are you still reading Buzz's book?

As how couldn't you be compelled to know how this world famous Astronaut's life turns out? After the man himself divulges candidly: Why should I get out of bed? I've been to the Moon and back so what can I accomplish today that could conceivably eclipse that?

The book is co-written by Ken Abraham who I'm not familiar with and is the second autobiographical story by Buzz Aldrin, the four decades follow-up to his initial book titled Return to Earth which was published in 1973.

The book briefly delves into the Apollo 11 mission, starting with Buzz standing on a Gang-way of his Saturn V chariot, musing how he can see the distant fires in the early morning of the some one million Onlookers gathered for the historic occasion!

Then describes the massive feat of Apollo 11 and the three Astronaut's: Neil Armstrong, Aldrin and Pete Collins journey home, all in two discs length before the real story begins - which I definitely suggest is worth reading.

Obviously I was drawn to the book having previously read; Err listened to two great articles from the September issue of Air & Space Magazine via my NFB Newsline for The Blind telephone service which just so happened to revolve around today's orbiting Space Station, with the first giving a rare glimpse into the "Rooskies" side of the station.

A Rare Look at the Russian Side of the Space Station: How the other half lives

While not sure if I'm duplicating thyself here, yet read this article first before the aforementioned 15 years  of human presence at the ISS above...

15 Years of Living in Space: The highs and lows of life in an orbiting tin can

And in what his latest wife Lois coined as  "The Business is Buzz!" This Octogenarian continues to dazzle me with brilliance, or is that Stardust; Hya! Having just recently accidently discovered him doing a rap song with "Snoop Dog-Dog" as Thy late 'Awntie Harriet called him. Which was performed when Buzz was nearly 80yrs old!

VIDEO The Making of The Rocket Experience Song

While buzz touches upon the protecting of his "Brand," briefly in a latter book chapter, regarding his wristwatch escapades, with his original Moon watch being stolen, along with subsequently setting the legal precedence for usage of Astronauts likeness's as unendorsed promotions for timepieces and their wares, whilst ultimately making an agreement with Omega upon future endorsements - which just so Karmically the following story link refers to current curiosity over watches traveling to the Moon.

The Watches That Went to the Moon

As Buzz's insights towards life in outer orbit and on Mother Earth makes me believe Humankind can still really reach for the Stars and Beyond...
Posted by Tomaso at 11:11 AM No comments:


It's that time once again Y'all, to be merry, enjoy family, friends 'N acquaintances  near & abroad... As your hard workin' No Fenders scribe Tomaso and his two ably bodied assistants thou Mad Molly and Thy Pixolator wish Y'all  Happy Holidays from Nofendersville!

As it's hard to believe that I'm closing out year Numeral Nine; Aye Karumba! Alas, as typical this time 'O year, when Daylight's scarce - I'm simply burned out (Due to the ENORMITY 'O STRAIN posting these riveting No Fenders tales 'O mine upon thy P.O.S. Blogger.com platform causes my faltering eyes!, neck & back) and just don't have the desire or energy, mostly energy to post the cadre of unfinished stories awaitin' bottling; Ya Sure Yuhs Betcha!

Hereinto, which is what speel checker likes to try changing Rio Haryanto's name to; Hya! Since there's only 227 Dazes remaining 'til IndyCar cranks U-P again; Hya!

Thus, I'll leave Y'all with a few "Justin-time" uncorked Posts over the next few weeks, since as the legendous' Dandy Don once sang;

Turn Out the Lights, the Party's Over

Henceforth, like that long defunct black 'n white paper magazine I once subscribed to yearly known as Ontrack, I'm taking a two weeks Winter's Slumber and will return on Monday, January 11, 2016.

And as always, Thanxs to all three  of my loyal readers; Hooah! Err, a B-I-G' THANK YOU SHOUT OUT to everybody who reads or supports  No Fenders and see Y'all next year...

Or like those fabulous Hosers' from Up North say, this one's empty, so Take Off Eh!

(Photos Courtesy of No Fenders ‘Offical Photographer ‘CARPETS)
Posted by Tomaso at 12:25 PM No comments: 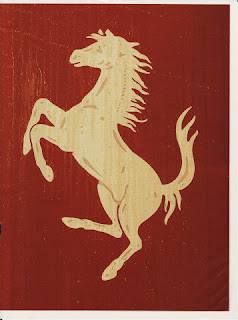 ‘Twas the day before Christmas, when through all of the paddocks.
Not a motor was idling, not even a single Cosworth “Lump” could be heard.

The garages were swept and tidied with care,
In hopes that Roger Penske soon would be there;

The mechanics were nestled all snug in their beds.
While visions of Championship bonuses danced in their heads. (Not to mention HULIO dreaming of what might have been, if only he hadn't crashed over that 'Yump in Houston)

And “Princess” in her negligee, (Or was that her Cowboy Hat 'N swim suit?) Along with Paul Tracy in his crash bucket, had just settled down for a quick tryst in the sack.
(Hey! I hear that Danica’s still available, right 'Ricky-boy? Likes Yuhs better not loose Danica's number...)

When out on the lawn there arose such a racket, ‘ol PT sprang from the bed to see what “TAG, Suitcase Servia, Whiney Bags and Bad Bobby D’ were groaning about.

The smoke from between Sea Bass’s ears. Glistened like a smoke signal, without a glow. When, what to PT’s wandering eyes should appear but a Ferrari ENZO followed by an armada of Prancing Horses in tow.

The ENZO was piloted by an ex-Formula 1 driver, still brutally quick.
That Tracy knew in an instant it must be Michael Schumacher.

As tyre tracks that leave ominous black streaks behind. While Herr Schumacher leaves another competitor further behind!

The revving and idling of each assorted Ferrari. As PT rubbed his hands. Down the chimney Schuey forlornly came. He was dressed all in Scuderia Red, from his head to his foot.

And his Nomex driver’s suit was all tarnished with ashes and soot;
an assortment of winning trophies, he’d stuffed into his back pack.

His eyes -- how they twinkled! His rosy cheeks, how they glowed.
His hair as always was perfect, (by Loreal...) his jaw like a chisel! His lips clenched in a mischievous smirk. As the smile was reminiscent of a Cheshire cat;

The remains of a Cuban cigar hung limply from his teeth. As clouds of Smoke encircled Schuey's head like a wreath;
He had a taunt face and washboard abs. that still showed his youthful physique when he laughed at the dumbfounded PT. He was strong and fit as an ox, a festive and jolly elf; Thus Paul could only laugh when he appeared

A wink of his eye and a twist of his head. Soon gave TRACY nothing to fear. As Schuey spoke nary a word, but went straight to his work. Filling all of the stockings with various racing trinkets. (Such as the 2002 Borg Warner Cup, a new three year contract signed by P.L. Newman & Carl Haas along with some of the Hamburgular’s secret winning sauce…)

Before Messer Chrome Horn could wipe away his astonishment, the famous German turned Quickly, laying his finger aside of his nose. And giving a nod, up the chimney he rose;

He sprang to his idling ENZO, and to his waiting minions gave a whistle. And the screeching of tortured Ferrari lumps could be heard as they burst away like rocket ships! But ‘Ol PT heard Schumacher exclaim, as he power-slided out of sight;

"Happy Holidays to all, and to all a good-night."