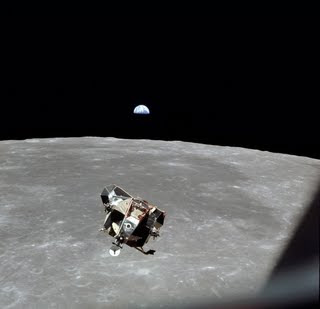 I suppose it was destiny, eh? That the very first time in my life that I’d actually be able to see the International Space Station (ISS) would naturally occur upon the 40th Anniversary of Man landing upon the Moon…

You know the day; July 20th, 1969, when Neil Armstrong uttered those famous words: One small step for Man, One Giant step for Mankind. As I suppose it was sadly fitting that esteemed Newsman Walter Cronkite would die at the age of 92 years on the same weekend when he’d called the historic action live on TV 40yrs earlier…

And thus I set my trusty ‘Ol VCR to record the two shows being showed that Monday night on the History channel, Beginning with a 30min recap of Mr. Cronkite’s calling of the action, which is still the most ever watched event on TV, when an amazing 600 million viewers tuned-in. Or as the vigilee’s at Central Park pronounced to one reporter, they were having a “Moon-in.” Also, garnering interest from around the world, Pope John VI even went so far as to have a colour television set installed in his summer residence to watch the Moon landing, while the entire nation of Italy were still stuck with Black ‘N White Telescreens… With the half hour program being followed by the 2hr Moonshot show on how the Astronaut’s were picked and how the whole Apollo 11 mission occurred.

Yet I suppose another irony was the fact that with the Space Shuttle’s arrival at the ISS, it would mark the record for most people ever at the Space Station at one time with a total of 13 Astronauts, of which we’d soon learn that one of the two Station’s commodes (toilets) would break during this rendezvous… Not to mention the irony in just having listened to Kenny Sergeant once again dip into his bag ‘O Boyhood humour on the Speed Freaks (8/02) and dribble on about the Japanese Astronaut who just wore his “el speci-el” underpants for a whole month. BUTT! I digress…

Yet, for several years now, I’ve been most disappointed to not be able to see the various satellites screaming overhead as many Family members point towards the open skies, whilst in non obliterated areas outside the City’s overabundance of lighting. So it was with great delight while recently in La Conner, WA that I was able to pick out the whitish pebble sized object hurtling past us outta the corner of my eye as Blogmeister Miguel helped me spot the speeding hulk in the night sky before it was gone!

Of course, this in turned sparked multiple questions about said object the following morning as we drank our coffee next to the water with a pleasant breeze blowing as the sun rose. So, how high in the sky is it relative to us? How fast does it travel? What is the square footage of the living quarters, and on and on we went, even going so far as to attempt figuring out the next time it would pass by.

So thank goodness for Al Gore and his world wide web thingy, which I pestered Miguel at ze Confuzer immediately after breakfast, who found the following answers to our questions. The ISS is situated 199-220 miles above Earth and is in a geosynchronous orbit. It circumnavigates the Earth’s diameter every 92 minutes and currently has 1,400 square feet of space for its living quarters… Which makes me think it musta been extremely tight quarters with all of those Astronauts up there, eh? (I got Dibbs on the bathroom…)

So with this knowledge in hand, and the assumption that we saw the ISS at 10PM, I quickly stated that we’d see the Space Station at 11:32PM tonight… (WRONG Answer) And then for humour I sat down and attempted to write my very first story on a laptop Confuzer, to which Miguel casually noted awhile later that it looked really good, except the CAPS lock had been on the entire time, not to mention the messed-up middle paragraph, which I contemplated publishing directly beneath the posting titled Tech Trouble; when I was without my Confuzer, but back to our discussion of when will the Space Station return?

Thus armed with this new fangled knowledge, we were poised to see if we’d even be close? And as dessert was being served, Miguel took up his position outside so we’d not miss the passing of the Station… And Holy Space-Underwear Batman! As everyone sat engorged in their three berry pie ‘N ice cream, Miguel cried out; Here it comes! Unfortunately it was at a much lower trajectory, (perhaps further away?) and your Humble Scribe wasn’t able to discern the whitish pebble object against the black sky, although everyone else saw it! As I sat in glee, laughing inwardly that Miguel & I had actually made the calculation correctly…

On a side note, I later discovered the following article in the New York Times about a side of Walter Cronkite that was unknown, that being his passion for Motor Racing, as IMS Historian extraordinaire Donald Davidson was quick to point out that Mr. Cronkite was a common guest at the Speedway “Many Moons ago.”