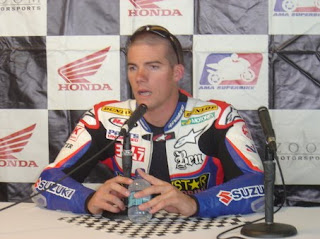 Its pretty funny to Mwah just how much the exploits of reigning World Superbike Champion (WSBK) and future MOTO GP rider Ben Spies has captivated me this season, especially since he’s not even a four wheel racing driver! (Although never say never I suppose?)

Having already scribbled about Ben spies’s memorable weekend in Portugal where he captured his and Yamaha’s very first WSBK Championship, Spies celebrated his accomplishment with a Wildcard MOTO GP Entry at the season finale in Valencia, Spain where he rode a “One-Off” race aboard the Sterilgarda Yamaha, (courtesy of Yamaha) in an effort to afford Spies more seat time as he prepares for his first full MOTO GP season in 2010 with the Tech 3 Yamaha Team, which will most likely receive much “Ink” (Press fodder) in unofficially being revered to as” Team Texas” as Spies will partner ex-Double WSBK Champion Colin Edwards, who’s already quite pleased with his junior teammates exploits…

Spies qualified on the third row of the grid in a very respectable ninth place, before falling backwards as the race progressed, at one point having slipped back as far as 12th before deciding to put his head down.

Having become comfortable with his new mount, which I heard Colin Edwards tell Dave Despain on Wind Tunnel; there’s simply NO comparison between a MOTO GP and World Superbike “Scooter.” The MOTO GP, which is the two wheeled formula 1 equivalent of Motorcycles simply is the most technologically advanced along with its amazing weight transference, i.e.; how F1 chassis simply react like Slot cars thru the twisty bits; which David Hobbs endlessly marvels about!

Thus Spies began running comparable lap times to his soon to be 2010 teammate Edwards who was lying fourth and steadily picked off rider after rider in front of him, ultimately passing Andrea Dovizioso for seventh place, when the rival Repsol Honda rider ran wide. By finishing one place ahead of Dovizioso, Spies enabled Edwards to secure fifth place in the overall MOTO GP Championships, with Dovizioso winding up sixth, to which obviously Colin was most enthused about! So now we’ll have to wait until next year to see how this satellite Yamaha Team fares, eh?

And it was a good weekend for Team USA, as Edwards led the Three Amigos home in fourth place, followed in fifth by the “Kentucky Kid,” a.k.a. Nicky Hayden (Ducati) and Spies in P7.