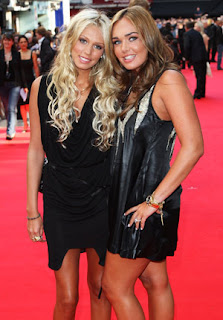 As eldest daughter Tamara, age 25 has apparently spouted off about Jenson Button not deserving to be World Champion, claiming Lewis Hamilton is a better driver and nicer Bloke to boot. As apparently Tamara’s funk comes over ‘JENSE answering his mobile in the middle of an interview with Tamara, who possibly told the Brit; DON’T you know who’s my Daddy?

Meanwhile PETA, Err Petra, age 21 was busy losing a Libel case in Britain, as the Fashion Designer apparently took a swipe at some Celebrities, regarding her quip about using real leather in her designs… Hmm? Where’s the Beef?
Posted by Tomaso at 8:46 AM