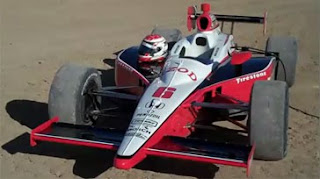 TEAM IZOD!
Uh, in case you missed it somehow? In a story that’s been plastered all over le internets, the Indy Car Series has finally landed a new “tittle” sponsor for its vaunted Indy Racing League as I believe some sorta shirt company is going to be the Leagues backer beginning in 2010, in a deal reportedly for six years (optional two year extension) and rumoured to be for $10-15 million per season and potentially worth as much as a “Mega” $100m over the contracts lifetime… In what will become the Tuh-Duh!

But according to Will of Is it May Yet? Its NOT that IZOD Company Y’all think it is…Fly Over for the 2010 Indianapolis 500 announced
And IZOD’s new proposed IndyCar T-Shirts look a HELL of a lot better then previous ICS incarnations, now hopefully they WON’T flashback to that catchy marketing jingle I AM INDY!
Posted by Tomaso at 9:44 AM