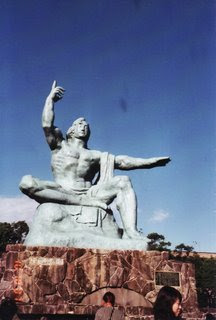 Imagine a time when it all began
In the dying days of a war
A weapon that would settle the score
Whoever found it first would be sure to do their worst
They always had before...

At the south end of the Nagasaki Atomic Bomb Museum’s Park is a giant flowing water fountain. This Fountain of Peace was created four decades ago in 1969 in order to give prayer to all of the people who perished in the second Atom Bomb dropping while vainly searching for water. At the base of the fountain is a black stone plaque with Lines from a poem carved into it. They were written by a girl named Sachiko Yamaguchi, who was nine at the time of the bombing,


It reads:
"I was thirsty beyond endurance. There was something oily on the surface of the water, but I wanted water so badly that I drank it just as it was."
Nagasaki Atom Bomb Park Photos
The New Regime
And thus we American’s celebrate our first Veteran’s Day under the guise of new leadership, as President Barack Obama follows in the nebulous footsteps of George W. Bush, as although we haven’t dropped any Atomic Bombs to date(?) Nevertheless Obama continues Bush’s legacy by continuing to fight two LOSING Wars in Afghanistan and Iraq, while preparing to increase the numbers of troops being sent to fight these USELESS Occupations!

And while I prefer to post my traditional Veteran’s Day’s thoughts which first began in my story Time Stands Still, this year I’m changing tact slightly, as something has been sticking in my craw ever since listening to the STUPID debate on Speed Freaks….

Spindrift
As sun goes down


On the western shore


The wind blows hard from the east


It whips the sand into a flying spindrift

As the sun goes down


On the western shore


It makes me feel uneasy


In the hot dry rasp of the devil winds


Who cares what a fool believes

So the debate in question on Speed Freaks revolved around whether or not Middle East money should be allowed to flow into the NHRA (National Hot Rod Association) and dare (I say it?) to potentially work its way into RASSCAR?

As this “Hot Button” topic was centered around the fact that Larry Dixon currently drives for Alan Abi Racing in the NHRA’s Top fuel division, while another “Rail Jockey” Hillary Will ran Bahrain sponsorship on the side of her Top Fueler previously…

This comes on top of the current speculation that George Gillett is planning to sell a minority stake in Richard Petty Motorsports (RPM) to Saudi Prince Faisal bin Fahd bin Abdullah al-Saud as part of a package including Ownership in Gillett’s Liverpool Football Club; while reportedly the deal could include running a Richard Petty Driving Experience program at a NASCAR style venue yet to be built in the Desert.

And now speculation suggest that Bruton Smith of Speedway Motorsports Inc. (SMI) is pursuing an alliance with the Emir of Qatar, Sheik Hamad Bin Khalifa al-Thani regarding a massive Motorsports complex similar to SMI’s “Los Wage$” (Las Vegas) 1300 acre site, as Bruton claims a design is already completed and is separate to any of Gillett’s proposed racing venues, in which he hopes to have up to 14 NASCAR-style facilities operating in the future.

Thus business is truly open in the Gulf; along with the black tar spickets being open, the region is now diversifying into Motorsports with the just completed running of the Inaugural Abu Dabi Grand Prix, along with the Bahrain GP (both Formula 1 events) plus the annual MOTO GP night race held in Qatar.

And yet while some RASSCARHEADS are blathering’ on ‘bout how we cannot have ‘dem Saudi’s in our be-LUV-ed Roundy round series, (DAMN! Weeze alreadys gots ‘dem darn Toy-Yoter’s, yuhs here?) As they shouldn’t be allowed to cherry pick the best NHRA Teams and simply buy their way into motor racing…

Yet perhaps current racing teams wouldn’t be force to look outside the box for new financial backers (money streams) if Obama hadn’t just signed a $680 BILLION Pentagon budget into law in order to keep the United States entangled in two utterly USELESS conflicts, eh? As this is just a one year budget for Military spending which doesn’t include the countless Billions approved to fund the Occupations, nor the extra $44b given to Homeland Security, and these are just the reported “Black” budgets; SHEISA!

Since it’s reported that the cost of having just One Soldier for One year in Afghanistan could pay for twenty schools to be built there; so what are we fighting for?
Posted by Tomaso at 7:45 AM