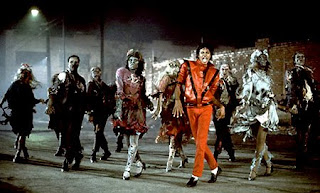 Otay, I confess I stole the title from “Jeffie” of My Name is IRL, which after I read it makes me smirk and think of that long lost MTV video classic Thriller and all of the marching Zombies…

After having recently learned about the Indy Car “bloggaratzi” taking over the Indianapolis Airwaves last Thursday evening on AM1070’s The Fan’s Trackside with Kevin ‘n Cavin, in which I tuned-in for my very first Trackside episode, carefully taking notes of everyone participating during the entire two hours.

Also, I especially liked Kevin’s quip about Curty Cavin’s Job Shadower: Are you going to be a Word Butcher on the keyboards or an Ink Stained wretch in Journalism… To which Cavin replied I’ve tried to talk him outta going into Journalism since there AIN’T gonna be any newspapers in the future…

But I really enjoyed Kevin doting on the “Vurd Botcherers” aspect, of which was a very clever takeoff regarding an ‘Ol article Jeff Olsen wrote abouts us nucel bashers ‘O keeboards many Moons ago, which I scribbled my thoughts in Beauty ‘N the Beast when gang tacklin’ the effervesant Mr. Olsen, noting how it was the perfect opportunity to cancel my subscription to Racer magazine!

Thus here’s my “lowdown” on the show’ participants in order, as Kevin Lee said ladies go first, so drumroll please…
the race gIRL1) Monica
Talked about upcoming “Tweet-Up,” while Cavin noted that Monica sounded an AWFUL lot like the Princess; Dan-Dan-Daniker, or as “The DAWG” calls her; the Danistar… To which Curt also mentioned that Kevin was wearing his pressdog T-Shirt to which shameless pandering then took place. As for the Tweet-up, you’ll have to go elsewhere in the Blogosphere since I’m nNOT-a member of the TWIT-er Nation, which I like to refer to as the GRUNTER Nation…

Is it May Yet?2) Will McCarty
Kevin asked for a brief description of his site to which Will explained started with the famous Son ‘O Stash mustachio photoshop pic and also provides Race Day weather forecasts which is what he does in his real job, along with having a very good sense ‘O Humour!

Also gave a “Shout-Out” to Jeff of My Name is IRL “Fame” who couldn’t make it since he was stuck in Rush hour AZ traffic… You know when Arizonan’s actually have to go the legal speed limit instead of 37.5+ mph over!

Open Paddock
3) Doug Patterson
This Blog is new to me, with my notes saying that Doug resides in Indy and he “Yakked” about the current state of the I500 as Matt “CAM-WOW!” Chamois of The Other Side likes to call the Indy 500…

Planet IRL4) Kohl Kirkland
Kevin noted that Kohl was the first of three members from Planet IRL, which seems a little overboard to me (Hee-Hee-Hee…) As this even took Kohl by surprise, who gave another Shout-Out to Jeffie, Gee Whiz, what’s the Dealio, eh?

Kohl brought up the subject of the current Open Wheel Racing Feeder system, mentioning how USF2000 had just had a press announcement, while also noting how there were only two I500 Rookies in ’07 and how we need more “Young Guns” in the series. Cavin gave his two cents on the muddied waters of our Open wheel ladder system, while Kevin brought up how the Champ Car Atlantics used to give $1m bonus to the season’s Champion.

For more Feeder series insights, I suggest you check out Ryan’s Junior Open wheel Talent blog, which keeps tabs on this sorta stuff.

16th and Georgetown
5) James Black
James talked primarily about the leagues hottest property at the moment; Ryan “The IZOD DUDE! Hunter-Reay as Kevin ‘N Cavin bantered on ‘bout how they expect RHR to do in 2010, as Curty pondered if RHR could take TK (Tony Kanaan) straight-up? But he certainly expected Hunter-Reay to push Marco and the Princess, or did Kevin say that last part?

Also Cavin said tell us ‘bout your IMS Seating Chart project, which James has just launched on his site after the previous author was unable to continue it, to which Cavin lamented I don’t know why the Indy Star never did anything like that before Kevin interjected; you shoulda taken a camera with you when you were counting all of ‘dem seats! To which Curt replied; whale I was trying to not get caught by the (Yelllow Shirts) Security…

Oil Pressure
6) George Phillips
George mentioned how he was probably the oldest (Southern) IRL Blogger having gone to his very first I500 race in 1965 and lamented on the lack of diversity in today’s Indy Car Series, noting how he really missed the competition of rival chassis/engine combinations and the innovation in general this brought about when everybody wanted to see what showed up each May at the Speedway; citing how Chip Ganassi took a flyer on the relatively unknown Reynard chassis in ’94 and two years later it was dominant. (It was also the Cheepster who switched to the rival Toyota when the Honda was dominant in CART, before Toyota became the “Lump” to have…) But all three agreed that they’re will never be another tyre war and they don’t like them either…

Indy Racing Revolution
8) Chris Estrada
Mr. “CHiPs” as I like to call Christopher talked a bit about how he got called up to the big leagues… And wanted to know the Hosts take on the current level of competition and what Tony Kottman needed to do, since he felt that if the league didn’t do something to spice it up from this year’s Red ‘N White Show; Can you say TCGR ‘N Penske? Then he felt that the league may be hard pressed to continue riding the IZOD wave…

Drive Hard-Turn Left9) Bill Potter
Bill is also another “Indy Homeboy” (While Monica also mentioned she was in the process of moving there, since it’s the Heartland of Open Wheel Racing) who wanted to know how the proposed Comcast Takeover, Err merger of NBC/Universal would effect the IndyCar viewership? To which Cavin commented he just doesn’t know how important it is to Comcast?

pressdog
10) Bill Zarhin
After some guffawing ‘bout wearing The DAWG’s T-Shirt, Bill shocked us all by talking ‘bout Formula 1 instead… Hey, wait a minute… F1? What’s going on here, that’s my turf Bubbah!

Bill spent considerable time chronicling the absolute zaniness of the just completed season; how BRAWN GP came outta nowhere along with Red Bull Racing which was an Also Ran squad before the season and how they finished 1-2 in the Drivers & Constructor’s Championships. And that doesn’t even mention all of the vonybrtdird… Err Controversies, sorry ‘bout ‘dat, meese nucel’s gotz in duh way!

Indy Car Garage
11) Tyler Carmichael
Tyler wanted to know if they thought the ICS was doing enough to build-up a younger Generation of Drivers to grow the league. To which Cavin said that sounds like a question we had earlier… To which it musta been here when Kevin noted the $1m Prize Fund Mazda used to hand out for the Atlantics Champion, to which Cavin said is only a third of what it’ll cost to be driving for a bargain basement bottom rung ICS team… And $5m will only make you an average race team

Planet IRL12) Joel Osborne
Joel, the Threes Company member of the Planet IRL Tag team wanted to know when was the last time a USAC Driver made it in Indy Cars instead of going to RASSCAR? To which Cavin explained how the parallels between USAC and RASSCAR were largely due to the similar driving style which is all about the weight bias being on the right rear tyre… To which Kevin eluded to how there’s NO current USAC road racing to give them the experience needed… To which Don Kay likes to lament how that’s exactly what Bruce Ashmore and his Gold Crown Series is setting out to rectify… While Cavin rattled off some names of drivers who had their shot in the Dark Dazes of the IRL (Pre-Unification) saying how Tony Stewart was a wildcard, but bringing up my favourite American IRL driver name Billy boat… And I seem to recall somebody named Greg Ray?

Anyways that’s the end ‘O my notes; so good job to all of the Word butchers taking part, to Kevin Lee for being the catalyst of the yearly Blogger Night and Curt Cavin and Kevin for making the show hum right along, as I’ll try to participate next time and may be we can talk Kevin “N Cavin into doing that twice a year? May be right before the season starts next year…

And if you’re interested in listening to the show, then check out the Trackside Bloggers Podcast, click here. (Thanxs to George Phillips who I borrowed the link from…)
You may also wish to read George Phillip’s Oil Pressure take on the event in his story An evening with Indy Car Bloggers
Posted by Tomaso at 8:20 AM