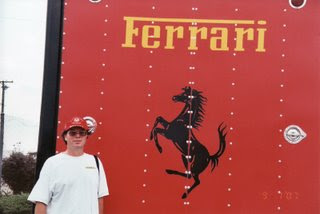 Welcome
You’ve found No Fenders, an eclectic collection of Rantings, Reflections and Random Thoughts primarily about Formula One, Indy Car and Open Wheel Racing, with a moderate sprinkling of Rally, Sports Car racing and Moto GP thrown into the veritable “Spin Cycle.” There are also other miscellaneous posts about my journeys around the Planet ‘N Pacific Northwest and whatever else I’m in the mood to Scribble ‘bout!

If you’re looking for proper grammatical structure, then Y’all have come to the wrong place, as I’m a proud original UOWWBA member... Which stood for United Open Wheel Word Butchers Association, as I use a cleverly concocted mix of Tomaso ‘TexMex English in all of my various ramblings...

About the Author
I have been an avid follower of Formula 1 and CART/Champ Car for the past two-plus decades, and now follow the Indy Car circuit with much bemusement... The very first F1 race I recall watching was the 1986 Detroit Grand Prix. Afterwards I attended my very first Grand Prix in 1989; the USGP held in Phoenix, Arizona and have been hooked ever since!I was first introduced to Champ Car when they were formerly known as CART at the 1987 G.I. Joes 200 at Portland, Oregon and then attended the race yearly to its bitter demise in 2007. As currently for reasons unknown, the Indy Racing League continues to ignore the Pacific Northwest on its current racing calendar.

When CART invaded Vancouver, BC in the early 1990’s I also became a “regular” visitor to the circuit Up North, Eh! Before this great Temporary Street Circuit was abolished in favour of the 2010 Winter Olympics...For a different perspective I attended the 1994 CART race on the One-mile “Bullring” Oval track in Phoenix, AZ, the year that Jacques Villeneuve tried to impale himself against the then Goodyear walkover Pedestrian Footbridge! Yet, I must say that I am not a fan of ovals, although I did thoroughly enjoy my inaugural Indianapolis 500 in May, 2009.

About this BlogAs previously mentioned; No Fenders is a racing news blog devoted primarily to the world of F1, Indy Car and more, and is written by Tomaso located in Seattle, WA. The site was launched on September 11th, 2006 and all opinions are solely those of Tomaso’s.

Unfortunately, on May 1, 2010 Blogger.com, an entity of Google irrevocably ruined the original No Fenders Blogsite by forcing it to be migrated to their “New & Improved” Blogging Platform... Which therefore rendered the existing 1,500+ stories with “Broken Images,” i.e.; image NO longer available on that World Wide Web thingy!

Thus, instead of trying to figure out how to re-install these, I’ve gone thru the labourious task of deleting the majority of ALL images posted from 2006-08; SHEISA!

ContactYou may contact Tomaso at: nofenders.f1@gmail.com
This page was last modified on: 09/02/10
Posted by Tomaso at 2:01 PM