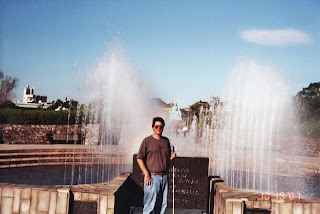 Upon my return from Japan, while having a discussion with Mary Ellen, I told her about a comment that I’d received while on holiday. This comment was in regards to my Suzuka, 2004 story.

Comment:I couldn't understand some parts of this article, but it sounds interesting...

And I’m still not sure which part of the story was confusing? As I’m wondering if it had to do with writing about my friend’s; The Bumps or the UFO discussion?; (“Phone Home, ET!”)

Then she asked if my various readers knew why some of the stories I wrote were “special?” Like why traveling to Mecca for my Indy Experience 2X Seater ride was so important? (See; Brickyard Flyer)

Do your readers know about your Vision disability? No, I replied to her. Are you gonna tell ‘em?

And without blathering on about this too much, I guess I should let y’all know that I have RP (Retinitis Pigmentosa) which means I have really CRAPY vision! (Hence the white cane I typically refrain from posing with.)

While in Japan in 2004, Albin explained to me what the bumps in the sidewalks of most major Japanese cities are for. As there’s usually a foot wide strip of raised bumps in the middle of the sidewalk for visually impaired persons to walk on and navigate their way about the city.

Yet there’s one large drawback to them. They seem to usually have something parked on top of them, like bicycles! And a lot of Japanese people seem to not be expecting anyone visually impaired to be utilizing them… As my biggest amusement in Japan was when Albin, Tanja & I went to the Atom Bomb museum in Nagasaki this past October.

Disembarking the Tram and walking towards the museum, an entire class of schoolchildren had been lined up on the yellow bumps of the platform… And they just simply began singing merrily as I approached…

For another related story see; Eye Rock 500
Posted by Tomaso at 9:04 AM