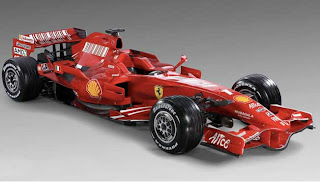 Continuing to lead the pack, Ferrari kicked off this year’s Formula 1 launches with the unveiling of the F2008 at Fiorano, Italy on January 6th. Ferrari’s new challenger is a re-designed version of its 2007 champion due to the dually imposed technical regulation changes which effect all of the F1 Constructors.

And wouldn’t you know it? While Kimi Raikkonen was busy shaking down the new F2008, Jean Todt was busy stirring the pot by claiming the new spec SECU developed by its rival McLaren, favours the Woking based team…
Posted by Tomaso at 8:18 AM