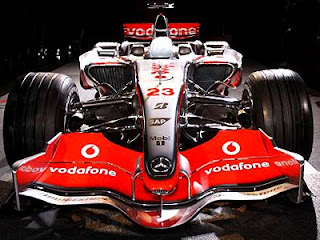 In the wake of its long running punishment over Stepney Gate, McLaren had originally intended to not host a glitzy car launch this season. Yet its major sponsors; nee Mercedes Benz wanted to do so and hence the launching of their newest challenger, the MP4-23 was hosted at the German automaker’s museum in Stuttgart, Germany. Like Ferrari, McLaren won’t debut their definitive “Melbourne-spec” bodywork until “Just-in-Time” for the race Down Under…
Posted by Tomaso at 8:07 AM