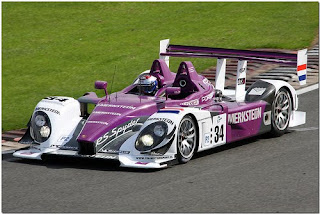 Ah, what a way to start the New Year, eh? Yep, that’s right. He’s BACK!!! While the rest of us are shaking off the cold, taking down the tree and dreading the onslaught of overpriced iron going across the block in Scottsdale, AZ.

As many of you were probably watching Santa’s progress on the internets via NORAD tracking… It does indeed appear that Santa made a pit stop in the “Neitherlands” this year, giving somebody a ride aboard a shiny new Porsche RS Spyder.

Yes, that’s right, I’m talking about Jos “THE BOSS” Verstappen, who’s ringing in the New Year just having been “inked” to drive for “Team het Nederlands.”
Verstappen will be part of an all Dutch sports car team contesting the 1,000km Le Mans Series events along with the 24 Heurs du Mans for Van Merksteijn Motorsports.

Verstappen, Jeroen Bleekemolen and Peter van Merksteijn will co-drive the teams prototype, as the Porsche RS Spyder will be competing in Europe for its first season, while Verstappen was last seen racing for Team Netherland in the A1 GP series during the 2006-07 season before being replaced by Bleekemolen.