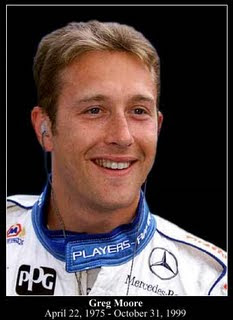 As Obviously we'll never truly know how the Canadian Kids' IndyCar career would have turned out? Since TK', Follow-your-Schnoz! Kanaan, who turns 45 at the end of December, was just a touch short of being four months older than Greg, is still racing in Indy Cars...

As some of the CART Drivers competing that day include the likes of Tony Kanaan, Michael Andretti, Bryan Herta, Dario Franchitti, Paul Tracy, Helio Castroneves, Juan Pablo Montoya, Jimmy Vasser, Max Papis and Scott Pruett to name a few. While certainly the race's winner Adrian Fernandez held No Satisfaction in his victory...

Yeah, Y'all know the Drill here in Nofendersville, as how time relentlessly Marches On, regardless of the situation, or our life's...

As it's hard to realize that a Decade's already Zoom-Zoomed' by since I made my one and only pilgrimage Up North eh! to visit the British Columbia's Sports Hall of Fame, specifically the Greg Moore Gallery in Vancouver, BC.

Or Y'all can read what I scribbled here upon No Fenders for the 10th Anniversary of Greg Moore's Death in the following tome, since I Don't feel like rehashing yesterday anymore...

While I Don't recall having watched the original airing of ESPN's RPM2Night's Greg Moore Special. I found this accidently when searching Youtube for Moore's Bansai Lap-1 Crash at Portland International Raceway in '98, which I witnessed live.

Although the video's a hefty 21+ minutes long, it's an Excellent Time Capsule chronicling the late Greg Moore's Death that fateful day at what was then known as California Speedway. And features snippets with Robin Miller and Jon Beekhuis Trackside. Along with Paul Page and Parker Johnstone, who called the race that fateful day. Along with their assessment upon Moore in general, and his decision to race that day with his wrist injury.

As I highly recommend watching the video, if you can carve out some 22mins time to view It in It's entirety...

While if you're ever in Downtown Vancouver, BC and looking for a Motor Racing or Sporting Fix, then Yuhs should try checking out the BC Sports Hall of Fame Museum, including the Greg Moore Gallery...

Greg Moore Gallery - BC  Sports Hall of Fame Museum
Posted by Tomaso at 2:22 PM No comments:


As could Thee Great White North be Frozen out of IndyCar's next year?

I first read the News via Racer.com late Monday Night when 'Ol R', aka Robin Miller and Marshall Pruett Broke the News that Arrow McLaren Racing SP, better known as SPAM'. Was planning to announce Patricio Pato' O'Ward and Oliver Askew as it's 2020 Driver line-up as early as this Wednesday.

Naturally this leaves The Mayor 'O Hinchtown, nee James Hinchcliffe without an IndyCar Drive for next year, although I've felt all along, that Hinch' wouldn't be retained at McLaren SP' due to his strong Hondre' ties.

And if All the behind the scenes Machinations are True? For what little I've read, then it seems like McLaren SP' has Hosed Hinchcliffe, by stringing him along Contractually. Whilst Zachery Brown was fishing for O'Ward's services, Uhm, the Best Driver lineup available...

Arrow McLaren SP Youth Move is Bold, but Not Crazy

As it puts me in a Wee Pickle, since I chose Pato as my latest Numero Uno IndyCar Driver at the beginning of this year, and I'll be quite happy over his return to what should be an IndyCar Contendah'. But I've got some Agro' with the way the Team's apparently playing Hardball with first, it's longtime engine supplier. And now it's Star Driver.

As Sam Schmidt, Rick Peterson & Company are saying All the right things. The effusive phrase for 5yrs of Service, we won't keep James from signing elsewhere even if he's still a Team Member, Yada-Yada-Yada. Now Quick, Change All of the locks on the Shop Doors, etc - since Hinch' is still one of our "Employees..;" Wink-Wink, Nudge-Nudge...

Whilst Obviously, Snap! Hinch's best landing destination for next year would be a third seat at Rahal Letterman Lanigan Racing, albeit the current Scuttlebutt suggests RLLR's asking price is too High for the KuhNuck'. But Seriously? Honda's going to leave Oh Canada's favourite Son off the IndyCar grid in 2020?

And if the rumours are true over SPAM' buying out the likeable Kuhnaidiun', and Honda wants to keep him as Thar Pitchman, then surely something will happen? Even if 'Ol Boobie Ruble's being his Sage Self by saying what I'd deem Code Speak for Hondre' to Show Him the Money! Whilst we All know that Dale Coyne's the scrappiest IndyCar Owner on the grid...

Rahal, Coyne express Interest in Talking to James Hinchcliffe
Posted by Tomaso at 3:03 PM No comments:


And I'm Not talkin' about readin' this Gory No Fenders Blog; Ha-Ha-Ha, It's just ah-Thriller!

VIDEO: She Blinded Me with Science - song

Whilst I'm totally Aware that it's just an expression to Describe what one thinks, nonetheless when having "My Gal" Lucy', My ARSE-STEAMED Screen Reader read me one of thou OLD-est IndyCar Blogger Geo. Phillips; Hya! Recent Oilpressure Stories. I noticed Thars' that word again, that mildly Annoys Mwah!

As George casually mentioned you'd need to be Blind to not notice how Ugly the new IndyCar airscreen made the Dallara DW12 chassis look! For which I'm totally relying upon his words regarding this.

Fans Have A Right to Speak and Be Heard

Yet George isn't alone in painting this word-association picture, since I've previously bridled over some French Chap known here in Nofendersville by many names, i.e.; "symone," Pageantry' or formally simon Pagenaud Who once Quipped You'd have to be Blind to not be able to see his Hideously Bright Menard's paint scheme. Which I tend to recall was during the 2018 Month of May...

As I've joked round here on No Fenders over the years about my being Blind, for which Tacoma Bureau Chief Mary Ellen likes to remind Mwah of, when I occasionally think I've still got my more youthful, better, more vibrant eyesight! Having reminded Y'all many times about my Affliction over the years with the following No Fenders rant...

And as I ponder this? I cannot even remember how many years now have gone by since my RP, technically known as Retinitis Pigmentosa has made me No longer able to even see what once were just Blobs 'O Colour going round in Circles, a la Open Wheel Racing Cars!


Not to mention how G-DAMN Insanely Grueling 'N Frustrating it's becoming trying to S-E-E what I'm loading onto the P.O.S. Blogger.com Blog Platform I utilize to post these Gory No Fenders Stories; SHEISA!

Since it's been a Bloody longtime now since I could see anythingy' on Ye Intrawoods', (Internet) perhaps as long ago as when I could actually discern the two opposing Lotus-Lotus, Renault-Renault; Err Caterham v Lotus-Renault Green vs. Black racing car liveries...

Alas, my racing world revolves round thoust past. Hence my being critical towards what I can only mentally picture in my Cranium when I hear the word Halo, a la a toilet seat? Versus the 1990's era of CART/Champ Car and formula 1 machinery I grew up with, for which one of 'Ol PT's monikers forever sticks in my memory banks...

Although  I'm Not saying I'm in favour of Not Protecting Racing Drivers! And certainly Don't have any answers, regarding improving Indy Cars or Single Seaters overall safety.

Since just think of how much Backlash there was regarding the Delta Wing concept, Eh? (Myself included) With canopies not being new, think Unlimited Hydroplanes.

Yet racing cars can Never be 100% Safe! Which Antoine Hubert's recent Death should remind us of.

Not to mention just having celebrated the five year anniversary of Jules Bianchi's Horrific Accident at Suzuka that ultimately led to his Death...

While George tosses out the idea of lowering the Airscreen by an inch or so for better cosmetics, I'd be weary of doing this, as especially taller drivers a la Graham Rahal might take offense to this?

Not to mention that nobody's talking 'bout reprofiling the front A-Arms which I learned about via Racer's Marshall Pruett's article with veteran IndyCar Engineer Craig Hansen regarding this 50lbs albatross.

While I haven't even gotten to my other point, when some 'Ol Curmudgeon said to me at the beginning of this year's IndyCar season. Why would Anybody wish to Listen to IndyCar's on Radio? In regards to IndyCar erecting it's NBC Sports Gold Bricks Pay Wall this year!

Since if you're blind like I happen to be, albeit having NO Clue upon how few Blind Open Wheel Racing Fans there are? Since the RP website Denotes Us Afflicted by this Disease as 1 in 4,000! Then obviously Clear & Concise Audio Description of Motor Racing is vitally Important vs. Television's ARSE-Sumption the Viewer can S-E-E the Onscreen action.

For which at least the Movie Industry get's It? As I now totally rely upon and Demand that any movie I attend be equipped with what I typically describe as "Adaptive listening" Devices. For which spoken narrative is heard via wireless Headset whenever there's No Onscreen Dialogue via the Actors.

Then again, perhaps I'm one of the lucky few who cannot See how Ugly either the now de Riggour Halo or Airscreen is? For which, why do I still recall 'lil Syd viddle', aka Sebastian Vettel claiming he got Dizzy when testing the original Red Bull Formula 1 Airscreen?

And why did that comment 'bout putting Lipstick on a Pig just spring to mind? But does it really matter what your Blind rambling No Fenders Blogger Tomaso thinks Anyways'.