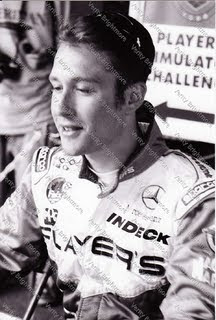 So recently I made the trek northwards to Vancouver, BC to visit the Greg Moore Gallery at the BC Sports Hall of Fame Museum, being Shepparded by esteemed Tacoma Bureau Chief Mary Ellen, who was my Tour guide and Chauffer for said trip, along with her trusty Canine Navigator’s & “Ferocious” Guard Dog’s…

Thus on Friday morning, Mary Ellen led Mwah & No Fenders Cub Photographer Alex Downtown on the Skytrain before a brief jaunt to BC Place, which appears to be under renovation for the fast approaching 2010 Winter Olympics; what a NIGHTMARE! That’ll be, (Larry) as it was pointed out by the Conductor on my northbound Amtrak Train that they’re increasing the number of “Checkpoint Charlie’s” (Border Crossing) stalls from three to ten at the Blaine Peace Arch, which was commissioned by Samuel Hill… In anticipation of the increased traffic flow, but I digress…

Entering the Museum, upon paying admission, Mary Ellen noticed there was a Greg Moore book on display; A Legacy of Spirit which was written shortly after his death and I’ve never heard of it before.


Terry fox
Walking thru the various hallways with photographs upon them, the first gallery we entered was for Terry fox, whom I very unwisely asked; who’s Terry Fox? What! You’ve never heard of Terry Fox? He’s only a National Hero of Canada. Having had his right leg amputated above the knee upon being diagnosed with cancer; Terry then in his early 20’s decided to create the Marathon of Hope, in which he aimed to run across the entire country of Canada in order to raise awareness (and funding) for a cure for cancer. Running with a prosthesis Terry planned to run a marathon a day in his quest to run from the Atlantic to Pacific Oceans, unfortunately having to quit after 143 days when his cancer had severely invaded both of his lungs and ultimately perishing from this in 1981 at the age of 22. So I find it very cool that the “Kuh-Nuck’s” have just created a new award in his memory for the fast approaching 2010 Winter Olympics…

The next gallery was dedicated to Rick Hansen. (Who?) Yeah, I’d never heard of him either… As Rick is another of Canada’s National Hero’s, as Rick became intrigued by Terry’s challenge and decided to mount his own. As a young boy, Rick suffered a paralyzing spinal chord accident when riding in the back of a Pickup truck. Yet Rick, inspired by Terry decided to literally conquer the world on his Man in Motion Tour, where Rick planned to circumnavigate the globe in a wheelchair! Having set off from Vancouver, BC in 1985 to fairly low media attention, Rick covered some 40,000km over 34 Countries and four Continents and returned to Vancouver 26 months later! His gallery exhibit includes the wheelchair used for this challenge and it looks very uncomfortable! Not to mention banged-up…

Next we passed thru a small gallery with wall carvings dedicated to Aboriginal Canadians; or First Nation – Indians before getting to the marquee gallery.

Greg Moore
And then, there it was, the Greg Moore Gallery, which I’m happy to report was the largest gallery of them all and is a fantastic tribute to this fallen Hero.

After reading a few statistics revealing just how “BAD ASS” of a racing driver Greg was, as his rise thru the ranks of Motor Racing was quite mercurial, we were greeted by Greg’s Shifter Kart pointing skywards behind glass… And then the next display case featured his Junior Hockey uniform & helmet, as “The Kuh-Nuck Kid” actually played Ice Hockey with future NHL Star Paul Kariya, while I seem to recall there also being mention of Cam Neely’s name.

Then it was time to look at his ex-Forsythe Racing (CART) Champ Car chassis, which interestingly as soon as you push the button, the lights dim and the video screen behind starts playing Paul Page calling the Vancouver, BC CART Race with none other then Greg onscreen piloting the Beast!

And of course I don’t know why I was so fixated upon this aspect, but I noticed while marveling (drooling) over every inch of that wonderful blue ‘N white Player’s liveried chassis, that it was missing the ubiquitous “Pop Off” valve… (And 2.65 liter V-8 Turbocharged motor) As I’m assuming that this was due to the fact that the Mercedes/Ilmor “Lump” was leased. BUT DAMN! I’d forgotten how good those Player’s Champ Cars looked!

There was a racing simulator game you could drive, which Alex enjoyed nestled in-between two more massive display cases, as I kept gravitating towards the display dedicated to Moore’s Indy Lights career, which interestingly had one pair of racing overalls embroidered with an USA patch sown onto it; while a second racing uniform was devoid of it.

Yet my most favourite item of the Indy Lights display was the Awesome 1/8th custom made (1 of 6?) racecar model for the winner of the Firestone Indy Lights Championship, circa 1995.

I also really liked the larger than life-size print mural of Greg with both hands overhead victoriously, along with that cheeky grin, which to me appeared to be in a golden hue, while Mary Ellen said it would make her too sad to read all of the touching comments placed around Greg, that were written by his “Posse.” (Dario, TK, Mad Max, Jimmy V, etc) As I kept walking back to look at this great mural which simply seemed to glow to me, and dare I say it? Even exuded Greg’s spirit/zest for life…

Having been told to look as long as I wanted, I made several passes thru the gallery to reconnoiter the various Memorabilia on display, which unfortunately I wasn’t able to discern any of the three (Pairs?) of red driving gloves… Of which ‘Juan even has a small sign denoting; “Red Gloves Rule!” Which Greg’s “Step-Mum” requested the Museum’s curator’s add to his display, while Massimiliano (“Mad Max”) Papis requires each racing contract to allow him to wear red gloves regardless of uniform colours…

Maple Ridge
On Sunday, we ventured over to Greg’s hometown of Maple Ridge, a somewhat nearby suburb of Vancouver, BC, which I’m happy to report he’s still well known by the “Local’s,” as we got directions to various Moore haunts from a resident Paramedic, who was very friendly towards us.

Thus, after driving down the Old Main Drag, where we didn’t spot Greg’s father’s (Rick) Chrysler Dealership, it was off to the Recreation (“Rec”) Center, which is part of a massive, sprawling complex and includes a large public library.

Popping inside the Rec Center, there was a small display case with another great Greg Moore racing helmet and small tribute/bio, as Mary Ellen inquired if there were anymore items dedicated to Moore to the nice Rec Center attendant, who directed us to check out the nearby library and Youth Center, which was just around the corner.

Youth CenterUnfortunately the Youth Center devoted to Greg Moore was closed, but thanks to Mary Ellen’s persistence, having spotted people inside and banging on the door, we were granted access to check-out the Display cabinet honouring Greg inside, where Mary Ellen read me the following statement from Richard Dean Anderson, best known as the television star “MacGyver.

Richard Dean Anderson:
“Aspiring to emulate the likes of Moss, Fangio, Brabham, Gurney and then later Senna during my driving career; everywhere I went while racing at Westwood: In the Pits, Bleachers or Paddock people would say have you heard about this young kid named Moore? As Greg was already a rising talent when I first heard of him in 1989 and subsequently followed his career.”
MacGyver has then since donated a beautiful deep blue Players liveried Greg Moore helmet, which resides in a small display case alongside Anderson’s stirring note inside the Greg Moore Youth Center… And is even more impressive as not even the next door library has any such remnants of Moore’s legacy; opting for just a baseball cap along with a nice picture of the Canadian “Heartthrob;” as next we set off in search of the town’s Mic-Dougal’s restaurant which I’d read had some of Moore’s trophies on display, but of course they weren’t at the first “Mickey-Dee’s.” And thus I was quite bemused by what another local retorted upon Mary Ellen’s inquiry at the second McDonald’s… NO! It’s gone; I mean they’ve only been there for 10yrs, as apparently the McDonald’s management had decided to not replace the Moore paraphernalia upon the just completed remodeling job, which reportedly just housed a poster, his book and other trinkets.

Yet after my enjoyable weekend of trouncing around Moore’s haunts, I was left pondering even further if Greg’s broken bone in his right hand from his Scooter incident in the Fontana Paddock, prior to being allowed to race with hand brace/splint ultimately contributed to Moore’s losing control of his racecar that fateful day on Halloween 10yrs ago.

And then there’s the irony of Greg’s car number being 99 and his death occurring in 1999…
But I strongly recommend if you’re in the Downtown corridor of Vancouver, BC and looking for something to do, then by all means check out the wonderful Greg Moore Gallery at BC Place!

BC Sports Hall of Fame Museum
Posted by Tomaso at 9:36 AM