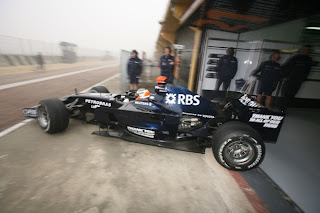 Williams rolled out its 2008 challenger, the FW30 amid little fan fare at Valencia, Spain last week during Formula 1 testing. The car was literally shrouded in fog, as the Grove based squad won’t be revealing their 2008 definative livery until Melbourne.

Williams tester Nico Hulkenberg spun the brand new chassis off track and lightly damaged the cars floor during shakedown testing, prior to Nico Rosberg taking over testing duties the following day…
Posted by Tomaso at 8:24 AM