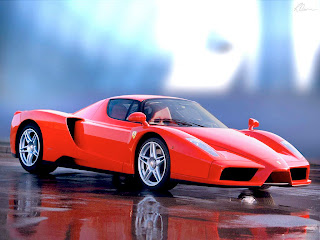 why do these stories about Ferrari ENZO’s being destroyed by novice drivers keep appearing in the mainstream media? (Something to do with the price of the vehicle. Or the lifestyles of the “Rich ‘N Famous?”)

First there was the “stolen” ENZO crashed while going airborne after hitting a bump in the road on Pacific Coast Hiway. Stefan Eriksson managed to impale the ENZO that he claimed to be a passenger in, into a telephone poll at approx. 162mph…

Turns out that the Eriksson couple had a shady past from Switzerland and both the ENZO and a Mercedes Benz SLR were actually owned by a Scotish bank with the SLR having been reported stolen. The SLR was recovered when Eriksson’s wife was stopped for a traffic infraction only days after the ENZO incident…

Awakening to the early morning news, I was chagrined to hear that another ENZO had bitten the dust. Apparently comedian Eddie Griffin DEMOLISHED an ENZO yesterday while practicing for an upcoming charity event, in part to promote his new movie “Redline.” Must be nice to be able to TOTAL somebody else’s ENZO…

And while the rare ENZO’s seem to be quickly disappearing from roadworthy condition, comes word that another mega-buck owner has decided to “customize” his 2003 ENZO. Spending upwards of $4 million to have Pininfarina craft it into a “one-off” modern day Ferrari P3/4.

Why would you do that to such a valuable automobile?
For more Automotive frivolities, see; Redlining an ENZO (Part 2)
Posted by Tomaso at 3:30 PM