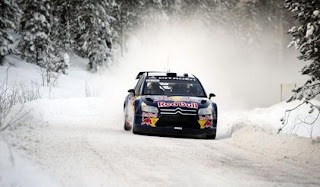 As I tells Yuh! Its rough sleddin’ tryin’ tooze BEATS duh ‘DAWG (Pressdog) to the ‘lectric scribblin-pad in order to break any news upon the Kimster and his “Oomplats!” (Especially since he’s got a 3hr ‘Yump on Mwah!) As word comes that Messer Räikkönen is reportedly very close to signing a deal to contest the full 2010 World Rally Championship season for Citroen, presumably backed by personal sponsor Red Bull, who are also major sponsors of the Citroen Total World Rally Team …

Raikkonen to race for Citroen in WRC next year?

And speculation still suggests that Räikkönen is simply taking a one year Sabbatical from the pinnacle ‘O Motorsport, (Formula 1) so could Kimi potentially take over Aussie Mark Webber’s seat in 2011 in order to prepare for “ZEBB’s (Vettel’s) departure to Mercedes Grand Prix in 2012?

Hmm? May be that Stuff really does give uze Wings, eh?
Posted by Tomaso at 10:18 AM