NO! That AIN'T no reference to the Stupendous "Hollywood Hotel" 'O Roundy-round fame! As just thought of this after the fact, when trying to come up with an Oh, So catchy title for a story that was originally centered around the years five, i.e.; 1985-75-65, etc. How could I be remiss to not include the Mighty Mach 5; Hooah!

Can I-T already be 30 Years Ago...
This thought has been gnawin' at Mwah awhile now, presumably since it seems to be the definition of when I began my current craving 'O motorsports, as I tend to believe that it was the first Indy 500 race I watched Solo, being a young  lad who'd just left thy Parent's Nest-egg. Which perhaps is why its bugging me that nary a peep's been made 'bout I-T having been three decades ago now that some Kentuckian Spun 'N Won his way into history!

As I have a few personal remembrances of 'Ol Hollywood, whom I think cemented the moniker after his cameo upon that long forgotten Hip' TV Show Miami Vice, where appropriately Danny Sullivan played a racing driver, albeit a Sports Car Ace - Ironically utilizing the long forgotten Tami Ami Park's temporary racecourse in Miami as a backdrop.

And its kinda maddening what Father Time does to your memory, And the Tricks I-T plays upon it! Since I cannot quite place which of the two years it was? (1988-89) Therefore, I'll go with my fading memory since I recall that being the one year I drove home before race-day!

Pretty certain the year was 1988? Or was it '89" Since my lone ticket stub for the only time I purchased 3-day tickets for Portland International Raceway's East End Grandstands is dated June 25, 1989 - With Danny's Mug upon I-T for winning the preceding year's event.

Having begun my Portland Int'l Raceway baptism in the West End Grandstands, while exploring the different vantage points before settling into a long stint in the West End's Top Row, and then ultimately "Flying Solo" at the Festival Chicane during Thy Chump Car Dazes!

As A-L-L of this was some two decades before Portland INt'l Raceway would be celebrating its Centennial - When I could still S-E-E the racecars...

Having arrived bright 'N early for Friday morning's first practice session and parking Black Beauty in the track's adjoining parking lot, I was ultra surprised when returning and think the door was unlocked? But my real surprise came when I tried to insert Thy key into the ignition for which NOTHING happened! And finally figured out something was horribly amiss when noticing the inside dome light wasn't working either.

Long story short, I'd been at the track less than two hours and somebody had tried stealing my black 1981 Nissan 280ZX by punching out the ignition lock, along with absconding with Tomas Senior's 35mm camera he'd loaned me for the occasion; SHEISA!

After collecting myself, I walked to the infield tower complex, presumably where the media centre was located, as its still funny that's the only time I've ever been inside the lone building in over 25yrs of tramplin' round PIR! When said building sported a huge clock upon it...

Trudging over Thar' to report the attempted theft for which I got to ride in the back of a Portland Police Car afterwards, as they'd promptly towed my toasted vehicle to a nearby gas station where I awaited the arrival of a locksmith who replaced the ignition switch, along with getting the battery jump started!

Still being somewhat shocked over the occurrence I promptly drove back home to Washington that afternoon, missing that year's race, as DON'T even think I watched it on Thy Telie?

As perhaps Thy Memory-banks always associated this with  Sullivan's '88 victory at PIR in what has always been my most favourite liveried IndyCar he drove, followed closely by the beautiful Molson bleu of latter years, since the East End Grandstand ticket sports his facsimile, eh? 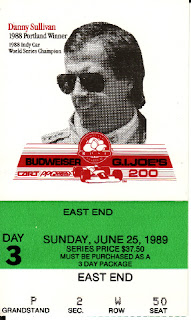 As I've spent countless hours with Blogmeister Miguel as Tour Guide ogling  over Danny's, Rick and the Unser's Indy 500 winning machinery at the Penske Racing Museum in Scottsdale, AZ which I'll hopefully go visit again shortly. Having previously chronicled the first of my many visits in;

Yet how many people remember that Sully' was a Formula 1 competitor before his time in the Spotlight at Penske Racing, eh? As Danny, who'd cut his racing teeth at the Jim Russell Racing School contested a single season for "Uncle Chopper's" (Ken Tyrrell) Benetton backed Tyrrell Organisation in 1983 alongside Michele Alboreto. As Danny would score a fine fifth place finish in the Principality, ergo Monte Carlo - His only career F1 points scored, when fifth place equaled two points.

Having actually swooned over his Benetton liveried Tyrrell Cosworth DFV racecar during my lone outing to Watkins Glen for an most enjoyable outing at the Zippo Historics 'Wayback in 'Twenty-oh-Seven; Gulp!

Meanwhile during the year that Sullivan 'N Crew had transitioned into the  fabled Penske Marlboro red and white, I spent the Labour Day weekend Up North Eh! At the Molson Indy Vancouver, BC race fretting over whether or not my Nissan 280ZX would be recovered?

As thief's had finally successfully stolen I-T after a further three-tries! And upon returning home, I'd be informed it had been "Dumped" at  Cody's restaurant in Bellevue, WA. Which was the restaurant of the late Wayne Cody, one of the original Procostinators 'O Seahawks Football; but I digress...

Next, in what was an unwise move, Sully joined the floundering Patrick Racing Alfa Romeo program in its final season, before Danny left to replace Meesh's favourite team owner "Booby Ruble" at Gales Racing alongside 'lil Al in '92.

Which sparks another enjoyable memory for Mwah, when Sully punted team-mate and de facto team leader Al Unser, Jr. from the lead at Long Beach in '92 when 'lil Al was angling for his fifth consecutive victory at the "Beach!"

Having already pronounced my admiration for thou resplendent Molson blue racing car above, is probably why I've long had a framed, autographed print depicting said race hanging  in Thy dining room forever! Not to mention the belated Northwest connection those Galmer chassis have...

Yet without doubt, my most cherished memory of Daniel John Sullivan III is the single time I met him briefly! As Danny was hired to give our fledgling IndyCar team PacWest Racing some notoriety, joining the Pacific Northwest squad for its second full season campaign, with ex-Formula 1 driver "Big Mo," aka Mauricio Gugelmin as Sully's Wingman, or was it visa-versa?

Know I've recounted the story here at No Fenders before, but, team owner Bruce McCaw and Tom Armstrong were heavily involved with contesting SOVREN's 4th 'O July Historics race, held yearly at Pacific Raceways and wallah! Or was it Wall Smack; THUD! As the PacWest IndyCar drivers also were on hand as featured guest participants...

Having finally corralled Danny in the Paddock, he asked me to be patient while he signed a kid's request first. Then putting his hand upon my shoulder he Quipped: "If I had a buck' for every time I signed one of these. I think I've signed them All!" Telling me he'd originally signed just a "limited edition" as souvenirs.

Holy Crap! Hard to believe that was twenty years ago, for which it ALSO been  hanging on the wall almost that long

Then at Michigan, he broke his pelvis amongst other injuries and announced his retirement from Open Wheel Racing, leaving with 17 career wins in 170-starts including his 1985 Borg Warner trophy and '88 PPG Cup, before he collectively fell off my radar screen after his few years as a Colour Commentator for ABC's IndyCar races.

NO idea why I still remember Danny's last(?) competitive major race outing, albeit probably having something to do with la rosso chariot he was driving.

With Sullivan contesting le Circuit de la Sarthe in '04, when at the spry age 'O 54, Sullivan co-drove one of the totally unknown to Mwah Baron Connor Racing's normally aspirated six liter V-12 Ferrari 575GTC entries with the Netherlands John Bosch and Italy's Thomas Biagi co-driving. As the No. 61 GTS entry finished 36th overall after being classified as Did Not Finish. (DNF)

As hard to believe that Monsieur Sullivan, as seem to recall he was living in France with his wife? (Since apparently in 2010 whilst commemorating the 25th anniversary of collecting Thy Borg Warner trophy, he talked 'bout just chillin' at home in Pebble Beach and watching via the Telie' instead of attending the Indy 500 in person...) Has just become an offical' Senior Citizen this March when he celebrated his 65th birthday! While his name occasionally pops-up at a Formula 1 race as a guest Racing Steward, which apparently he's done three times.

Alas, as 'Ol Hollywood's star was fading, a new constellation was sweeping over IndyCar, simply known as Mansell Mania!

RETRO: “Mansell Mania” invades the Speedway...
Posted by Tomaso at 9:56 AM