Sorry folks, but I just cannot let go of the fact that Portland has been majorly “Dissed” by the Indy Car World Series... Although I suppose I should understand by now that IMS rules the roost and will not play second fiddle to anybody! Yet, while much ado has been made over the fact that this year’s Indy 500 marks the famed Speedway’s Centennial, (Part One) little noise seems to be made about the fact that Portland, Oregon is also celebrating its own Open Wheel Racing Centennial, as its AAA sanctioned road race pre-dates the series first visit to Indianapolis, with Portland’s inaugural race being held on June 12, 1909; while today marks the 100th Anniversary of the Speedway hosting its inaugural event; the National Balloon race, of which IMS founder Carl Fisher was participating in... So, it’s a bit funny to me how I’m assuming that there’ll be NO mention of this fact by Indy Car, which seems sad to think that there still is an unspoken rift between CART/Champ Car and the IRL, of which I suppose will linger on for several years to come, sorta like the Civil War? Truesports; Scott Pruett
And although my earliest memories of Open Wheel Racing cars is those bygone days of the early 1970’s with ABC’s Wide World of Sports Jim McKay at the microphone over Memorial Day weekend... much of my zest for this unique series spawn’s from traipsing about the grounds Of PIR for over two decades and the yearly pilgrimage on Father’s Day weekend to watch the Champ Cars.

Portland celebrates 90th Anniversary
It was here that battle lines were drawn over whether you were an Andretti or Unser “Hater!” As the elder generation gave way to the mighty skirmishes between Mikey and Little Al, although John and Jeff Andretti would also take turns at Portland, along with Mario’s farewell tour, whose teammate was none other than “Il Lione,” a.k.a. Nigel Mansell or better known as BLOODY NIGE! There was Scott Pruett persevering in the struggling Truesports chassis, which always seemed to be one step behind on engine choice, while Randall was always quick to give a driver a new nickname like “Stevie Johnson” (Stefan Johansson) and Raul Boesel being the originall Boom-Boom Smash-Smash BRAHMA! Who was at the time being sponsored by Brahma Beer. Yet, one of my most favourite memories is the Pub we made our yearly destination sporting a life-size cardboard cutout of Bobby Rahal, who I used to call “Boobie Ruble,” of which Meesh has a much more diabolical spelling of... As Rahal senior was resplendent in his Miller High Life racing overalls and somebody had cleverly stuck a note underneath his arm saying “Need two tickets for Indy!” Since this was the year that the Three time CART Champion had switched to Honda “Lumps” and looked set to fail qualifying for the 1994 Indy 500 before making the painful decision to switch to a customer Penske/Ilmor chassis instead to satisfy his sponsors... Then there was the year when a person by the name of Robby Gordon asked me if the seat next to me in the Grandstands was taken? As he and his girlfriend sat thru the entire Trans Am race, as I tried having a casual conversation with him, while my friends tried heckling him... As this was his Rookie season in CART, driving for ‘Ol Super Tex... Before I got his autograph the following year when he’d jumped to Derrick Walker’s “Team Valvoline” and Robby seemed none too impressed with me when discovering my pen was running dry of ink! Or watching a very “Young Lion” named Jon Beekhus kicking ARSE in the ARS... (American Racing Series) which I believe was the pre-cursor to the original Indy Lights series, as the ARS chassis were motivated by normally aspirated Buick V-6’s... 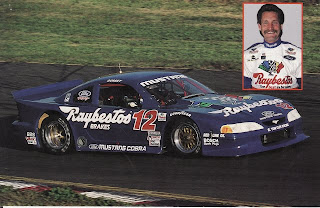 Dorsey Schroeder; Tom Gloy Trans Am Mustang
And then there was the SCCA Trans Am, which just had some of the NARLIEST Pony Cars going fender to fender, as this was during the era of Factory backed “Works” teams featuring the Ford Mustang, Chevy Camaro and Dodge Avenger(?) With Tommy Kendall, Dorsey Schrader, Ron Fellows, Scott Sharp and the Archer Brothers to name a few; while there was our local PacWest Racing team making good, as Mark Blundell captured the team’s very first victory in what must arguably be Portland’s closest finish, beating Gil De Ferran in a drag race, with Raul Boesel in third for CART’s closest ever 1-2-3 finish in its history. 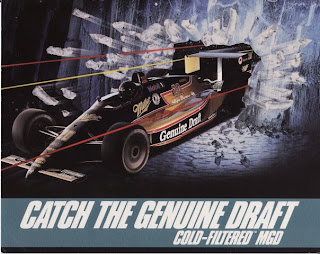 And witnessing “Mr. Hollywood” or “Sully” (Danny Sullivan) going from the highs of CART Champion in 1988 in the beautifully prepared gold Penske PC-17/Chevrolet Miller High Life to the lows of struggling while driving for Pat Patrick in the hugely uncompetitive Alfa Romeo powered Lola T91/00 chassis.
Along with Marlboro Team Penske’s three car armada simply crushing everybody in its wake, while “My Boy Dirtmann” (Robby Gordon) Pipped ‘Ol Bloody Nige for fourth place on the final lap coming onto the front straight... (Remember that Randall?) 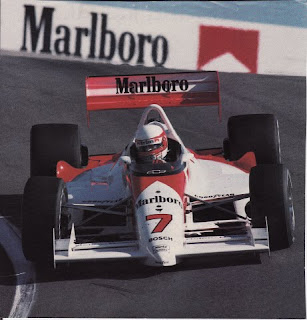 Danny Sullivan
Then the tide turned red, as those pesky Target/Chip Ganassi cars ruled the roost in CART, winning an unprecedented four consecutive Championships (1996-99) as Jimmy Vasser, Alex Zanardi and Juan Pablo Montoya flexed their muscles on track, before Kenny Brack had what was deemed a sub-par season driving for The Cheepster!” Or watching De Ferran take an improbable victory in the low budget Walker Racing entity vs. the big Guns of Penske, etc. by putting his Goodyear tires to good use over the opposition, as Derrick Walker called another crafty race for his charge, while Team Rahal triumphed at Portland with Max Papis, with Brack and Vasser driving that wonderful looking white/yellow Shell car, along with Mexican Michele Jourdain Jr’s brief tenure with the team. And I’ve completely left out the “Kuh-Nuck’s” (Not on purpose Meesh & CAM-Wow) as there was Scott Goodyear, Ross Bentley, and John Jones off the top ‘O my noggin... Not to mention somebody named PT, as Mr. Chrome Horn (Paul Tracy) and Dario Franchitti were always a force to be reckoned with at Team Kool Green, along with some cats nicknamed Jack Vanilla, (Jacques Villeneuve) Pat the Carpenter (Patrick Carpentier) and TAG. (Alex Tagliani) And let’s NOT forget the late, great Greg Moore, whom I recall watching cause a massive seven car pile-up into the Festival Curves by going into the corner on the start overly aggressive and ultimately flying off track... Or “Shorty” (Cristiano da Matta) scoring his final Champ Car victory whilst driving for PKV Racing before his horrendous testing accident at Road America, while Portland was also the site for first time CART/Champ Car maiden victories for: Al Unser Jr., Alex Zanardi (Mark Blundell) and AJ Allmendinger.