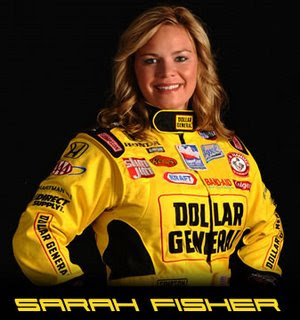 I’d say that the majority of today’s mainstream media attention is firmly affixed upon the Indy Racing League’s Danica Patrick, having FINALY WON her first major car race with some precocious fuel mileage strategy in Motegi, Japan last year. Yet with my NON politically correct stance towards Princess Danicker and Milka Duno’s indecision upon which car to drive? I continue to sit firmly on the Sarah Fisher side of the Danica divide, thus I thought I’d shed some light on the REAL women of motorsport once again, As these female pioneers truly paved the way for Danica to live the “Good Life.”
Interestingly the first women racers were in Grand Prix, prior to the modern day Formula 1 championship which began in 1950. As the earliest reports of female race driver’s centers upon a trio of women, with Eliska Junkova and “Helle Nice” being the most flamboyant. While Kay Petre made her impression due to her small stature behind the wheel of the day’s monstrous vehicles. Junkova caused quite a “stir” when it was discovered that a woman led the opening laps of the 1928 Targa Florio. While the lady behind the wheel of the Bugatti leading the event was quickly named the “Queen of the Steering wheel” by the adoring press, as the Czechoslovakian is the only woman to have ever won a Grand Prix which she accomplished at the Nurburgring in 1926. Junkova retired from racing immediately after her husband was killed in 1928 at the Nurburgring while piloting the vehicle the couple were co-driving in the event.
Helle Nice was Mariette Hélène Delangle’s stage name, as she made her fame and fortune as a Paris “Show Girl.” Amassing wealth and popularity as a dancer, she reportedly enjoyed “Life in the Fast Lane.” As rumours suggest she had a long list of multiple suitors including Philippe de Rothschild and Jean Bugatti. She competed in several Grand Prix’s during the early 1930’s.
Yet sadly after the war, Louis Chiron accused Helle Nice of being a Gestapo agent which effectively ended her career. (Along with ruining her life!) Helle Nice died “penniless” in Paris in 1984.
Kay Petre stood 4’10” tall, making many marvel at her physical ability to manhandle a 10.5 liter V-12 Delage while setting speed records at the famed Brooklands circuit. Petre was most likely the first female to compete in the 24 Heurs du Mans, finishing 13th overall in 1936. She competed in three Grand Prix’s in 1937 before being injured. Petre went on to become a motor journalist along with being an automotive fabric designer.
After two decades of no women participants, Maria Teresa de Filippis contested three Grand Prix’s between 1958-59. While it would be almost another two decades before a quartet of female drivers attempted participating in various Formula 1 races from 1974-1992. (Lella Lombardi, Divina Galica, Desire Wilson and Giovanna Amati).
Lombardi raced twelve times, becoming the only woman to have ever scored a World Championship point in 1976. Finishing sixth in the rain shortened Spanish GP, where Lombardi was awarded a half point. Lella also finished seventh at the Nurburgring. Galica, Wilson and Amati were entered, but didn’t qualify for their races. With quite a fuss caused when multiple females were entered for the 1976 British GP. Amati was the last female to enter a Formula 1 event for the struggling Brabham team before being replaced by Damon Hill, with Amati’s F1 test coming courtesy of playboy Flavour Flav… (Flavio Briatore).
Meanwhile Janet Guthrie began her racing career in Sports Cars and won two class victories in the 12 Hours of Sebring, prior to getting her big break, when in 1976 Rolla Vollstedt gave her a test drive at Indianapolis, although she didn’t qualify for that year’s race. Yet in 1977 Guthrie would not only become the very first female to race in the Indianapolis 500, but also make history as the first woman to race in the Daytona 500.
Guthrie would compete at Indy three times (1977-79) with a best finish of 9th in 1978 before disappearing from the Speedway’s horizon. It would be a further 13 years before a second female would participate in the Indy 500. As although Desire Wilson passed her Rookie test on May 11, 1982, she failed to qualify for that year’s race, thus it was a further decade before Lyn St James made the first of her seven appearances. St James became Indy’s first female rookie of the year in 1992. This debut race would also become her best finish of 11th place at the Speedway.
Y2K
As the new millennium dawned, (2000) the third female to crack the Brickyard’s entry list was Sarah Fisher driving for Derrick Walker. Fisher has since gone on to become the first woman driver to win a Pole in the Indy Racing League and holds the records for fastest one and four lap qualifying speeds at Indy. (2002: One lap = 229.675mph; Four lap average = 229.439mph)
Next, in 2005 Danica Patrick burst upon the scene, causing instant Danica mania while flirting with capturing the pole at Indy and finishing 4th in her rookie year for Rahal Letterman Racing, which at the time was the highest finish ever by a female at the Speedway and garnered Patrick Rookie of the Year honours.

In 2007, another first was recorded, when the Brickyard saw three females take the green flag for the very first time in the Speedway’s history, as Venezuelan Rookie Milka Duno driving her CITGO sponsored Team SAMAX racecar joined Sarah Fisher and Danica Patrick in the 91st running of the Indianapolis 500.

The 2008 event brought many changes for all three of these female contestants, as we were all painfully aware of Princess Danicker basking in the glow of winning her first victory just over one month prior to the 92nd running of the INDY 500, at the Twin Ring Oval of Motegi, Japan. Danica rolled off fifth from the middle of Row 2 aboard her #7 Motorola/ Andretti Green Racing and finished 22nd, with Contact on lap 171.

Meanwhile, the driver of this trio struggling the hardest financially to make her record tying seventh Indy 500 start, without a doubt was Sarah Fisher. After a disappointing 2007 season as Buddy Rice’s team mate at Dreyer & Reinbold Racing, Fisher decided to accomplish another first by starting her own race team and thus becoming the first female Indy Car owner. Hoping to have her team backed by Gravity Entertainment and ResQ energy Drinks adorning her sidepods, both entities failed to ever mail her the Check! As Fisher has since moved on, as her No. 67 Dallara’s sidepods would be emblazoned with her new associate sponsors, with Sarah qualifying 22nd, starting from the inside of Row 8. Unfortunately Sarah by no fault of her own would be involved in an accident with a spinning Tony Kanaan and end up 30th.

Yet, Milka Duno uncharacteristically “Flew under the Radar” during the Month of May, having switched teams in the off season, becoming part of a three car effort fielded by Dreyer & Reinbold Racing and was still backed by CITGO, Duno then eagerly took to constantly asking her teammates Buddy Rice (2004 Indianapolis 500 winner) and Townsend Bell for advice on how to master the Brickyard, as Duno would qualified 27th, lining up on the outside of Row 9. Ironically, Milka was the highest finishing Female, with a classified finish of 19th and Running, albeit only completing 185 total laps.

2009: The Centennial Era Begins
As you may be aware of? This year marks the first part of a three year Centennial celebration at the Speedway, which first hosted races in 1909, albeit a Balloon Race preceding the roar of Automobile engines. These were then followed by the inaugural 500 mile event being held in 1911, which was won by Ray Haroon aboard the Marmon Wasp.

For this year’s event, all three of these female contestants have gone thru more changes... As we’re all painfully aware that Princess Danicker still basks in the glow of winning her first victory just over One year ago, Now entering her third season with Andretti Green Racing, as her Motorola racecar was recently recovered in another media blitz, which will see the No. 7 sporting new Boost Mobile livery, rolling off from the inside of Row 4, having qualified 10th at 222.882mph.

Meanwhile, the driver of this trio showing the most turnaround from last year is undoubtedly Sarah Fisher, who’s in solid financial shape this season thanks in large part to Dollar General, who’s just extended Fisher’s schedule to encompass six Ovals, beginning at Kansas.

Thus, Fisher captures the record for Female pilots by making her record breaking eighth Indy 500 start, as Sarah qualified her No. 67 Dollar General/Sarah Fisher Racing 21st at 222.082mph and will start from the inside of Row 7.

Milka Duno has caused the most fanfare early this year with her on-again/off-again relationship when trying to secure a third seat at Newman Haas lanigan Racing, of which apparently her promised sponsorship fell thru.

Duno has since returned to her old haunt; Dreyer & Reinbold Racing, also making her ’09 season debut at Kansas, where she and Fisher shared the same starting row. Milka will be part of a four car armada out of the stable of D & R’s Indiana shop, with the four car Dryer & Reinbold effort sporting two cars for Milka and Rookie British teammate Mike Conway, while Associate programs with Richard Petty Motorsports and Kingdom Racing are being fielded for John Andretti and Davey Hamilton respectively. Milka is being backed by CITGO once again, qualifying her No. 23 “CITGO El Speciale” 30th at 221.106mph and will start from the inside of Row 10 this year, as ironically “Tres hembras”
all start on the inside of their respective Rows...

Yet this year’s Qualifying theme was to withdraw your entry and requalify at a faster time in hopes of improving your starting position which Danica, Sara and Milka all did, with Fisher having the biggest moment in her initial qualifying run, having to get out of the throttle and loosing a whole 5mph from 222 to 217 entering Turn 1!

And the roar of the crowd was unmistakable, as Danica Patrick finished a record third place, besting her previous record fourth position and re-establishing the record for highest finishing Female in the Brickyard’s history, while Sarah Fisher finished a very respectable 17th and was this year’s recipient of the Scott Brayton Driver’s Trophy Award; “Presented annually to the driver best exemplifying the character and racing spirit of the late driver Scott Brayton.”

Meanwhile as Danny Bridges mused, Milka Duno actually finished a career best One lap down, being recorded as the only car to finish 199 laps and being classified as 20th/Running, having progressed steadily forward in her three starts at the Speedway. In 2007, her rookie year, she crashed on lap 65 and in 2008, although finishing 19th and Running, (L185) albeit some 15 laps behind.
Thus, as Virginia Slims would say, “You’ve come a long way Baby…”
Posted by Tomaso at 8:00 AM