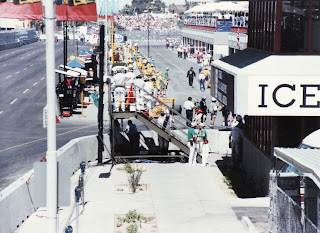 With the recent firestorm raging over the 2010 Budget Cap Formulae, its hard to believe that it was twenty years ago today that I attended my very first Formula 1 race in “the Valley of the Sun,” as this venue was the new home of the USGP, with Bernie Ecclestone and the City of Phoenix having inked a five year deal to host a temporary street circuit race around the Downtown corridor of Phoenix, Arizona.
And thus, just like May 1, 1994, I can still fondly recall where I was on June 4, 1989, as the inaugural Phoenix Grand Prix was being contested in 104 degrees HEAT! To which Jeffrey sez; “In the shade, may be?” And although many like to say it’s a DRY HEAT... So is your Oven! Yet I recall thinking how cool was it to be standing in the middle of a concrete jersey barrier canyon with the BADDEST FREAKIN’ Racing Cars on the planet whizzing by whilst a much younger Tomaso was cradling an ice cold Foster “Oil Can” in his hands to battle the oppressive heat! As ironically the promoter’s title sponsor was Iceberg! As the Formula One experiment would go the way of the Titanic, albeit at least having a three year run, as fast forward some 18 years when Champ Cars (Remember them?) Phoenix Promoter Dale Jensen, part owner of the Arizona Diamondbacks said that economic turmoil had prevented the landing of major event sponsorship. With the city of Phoenix seemingly indifferent to another street car race in the Downtown area, (After the long defunct Iceberg Grand Prix: 1989-91) still lingering on and the Phoenix Champ Car event is stillborn... As I still recall the sediments of the Arizona locals:

“I CAN’T get to my Bar! There’s some funny ‘lil cars blockin’ off the streets. What are all these Damn Foreigners doin’ here…”
Thus, while this most magnificent circus of Formula 1 machinery played its majestical symphony of mechanical noises, unbeknownst to Mwah, across the Pacific Ocean, in the nether regions of China, a totally OBSCENE and uncalled for event to be known around the world as Tiananmen Square was unfolding…

Yet, back to happier circumstances, as your Humble Scribe has previously scribbled about encountering the GODS of F1 in Phoenix, circa 1989 in May Day, while my most entertaining memory of the Iceberg Grand Prix is Roberto’s yarn about riding the elevator with a clueless friend alongside Alessandro Nannini and asking Sandro; So, are you like one of the Team Mechanics or what? As Sandro was at the time a rising F1 Star, prior to his devastating Helicopter accident in which surgeons successfully reattached his hand! 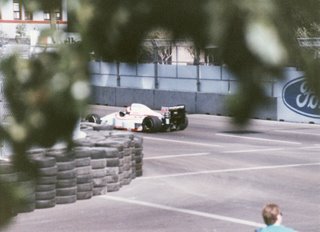 But let’s cut to the chase, shall we? As I recall unknowingly sitting in the Media section on the front straightaway with Hall and taking an unbelievable amount of photos before we were summarily dismissed due to the lack of proper credentials… WE DON’T NEED NO STINKIN’ MEDIA CREDENTIALS!

As this was the first year of the return to a Normally Aspirated (3.5 liter) engine formulae, which brought a variety of different engines, i.e.; V-8, V-10 and V-12 “Lumps,” as Ford/Cosworth and Judd (a collaboration between John Judd and Sir Jack Brabham) led the V-8 Brigade. Meanwhile Honda and Renault were the only Manufacturers to take the V-10 route, With the “Regies” soon to be all conquering pneumatic valve V-10 making it’s debut, whilst Ferrari and Lamborghini (then owned by Chrysler) carried on with wonderful sounding V-12’s… As the Scuderia Ferrari’s shrieking V-12 was instantly recognizable, prior to its sighted arrival by the fact that the Scuderia was the only Constructor utilizing the soon to become de rigor semi-automatic paddle shift gearbox, while the remainder of the field trundled on with manual shift crash boxes… Giving the Ferrari’s an unmistakable shrill pitch that resonated above all of the rest on the 2.36 mile Temporary Street Circuit…


DriversMcLaren’s Ayrton Senna and Alain Prost were clearly the class of the field, arguably head ‘N shoulders above the remainder of contestants, as only “Il Lione” or “BLOODY NIGE, better known as Nigel Mansell was able to regularly challenge the McLaren duo, while his teammate Gerhard Berger also occasionally joined the party. Ford’s Benetton “Works” Driver tandem of Alessandro Nannini and Rookie Johnny Herbert were an interesting pair, as one had to be impressed by Herbert’s fortitude... Having suffered a massive crash the year prior with harsh damage to his legs and feet, as I recall reading how bits of rubber from the race track’s tarmac were to exude their selves from his feet years later!

Williams Thierry Boutsen and Ricardo Patrese had the aforementioned Renault powerplants, while the rest of the field was primarily populated by Ford and Judd V-8 Lumps, with Tyrrell sporting such drivers as Dr. Jonathan Palmer, Michele Alboreto and rising star Jean Alesi. Ligier had the controversial Rene Arnoux and the rebadged March team, now known as Leyton House Racing featured Ivan Capelli and Mauricio Gugelmin... while Larrousse was the sole Lamborghini customer, with my favourite new team at this point for reasons unknown being the Moneytron Onyx team spearheaded by the irrepressible “Stevie Johnson,” a.k.a. Stefan Johansson, partnered with Belgian Bad Boy Bertrand Gachot... 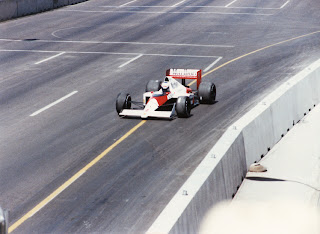 RaceAyrton Senna set blistering times during qualifying, nearly 1.5 seconds ahead of rival teammate Alain Prost, with some cynics suggesting Senna surely must have cut thru the Sheraton parking lot? And Senna would have most likely won the race if he hadn’t suffered from “Electronics” failure, as even then Auto Manufacturers were loathe to state their engines had failed, as Prost who overcame overheating (engine, NOT Driver) problems of his own to take the chequered flag ahead of Ricardo Patrese and local oy Eddie (“Underachiever) Cheever in a Arrows/Ford, while an extremely low number of Drivers finished the event; as Christian Danner in a Rial/Cosworth was fourth, Herbert fifth and Boutsen sixth... With the rest of the field either retiring from mechanical troubles, accidents or driver fatigue; as Nannini was overcome with exhaustion, Gugelmin being DQ’ed, with the others either failing to qualify or pre-qualify as the oppressive heat took its toll.

Ironically, the 31,000+ attendees were grossly overshadowed by the 70,000 Arizonan’s taking part in that year’s inaugural Ostrich Festival in nearby Chandler, AZ... YES! You read that correctly, a Freakin’ Ostrich Festival was more popular then the Formula 1 event... Which would be moved to March the following year to beat the Desert heat... While my favourite headline from the myriad of newspaper clippings Arizona Bureau Chief MJ sent me proclaimed after the 1991 race that major improvements would make next year’s race even better! Which I’ve tucked away in a drawer somewhere, as the race was to be cancelled and the USGP would take a nine year hiatus before debuting at Indianapolis...
Posted by Tomaso at 8:53 AM