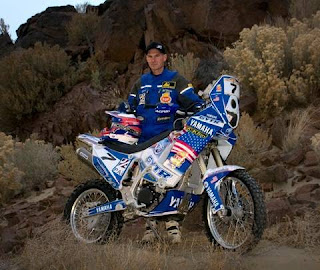 It’s always funny to find out some sliver of information on the final day of a race outing, as I was surprised to hear Robby “Purple” Floyd utter that American Bike rider Jonah Street was from the sleepy little town of Yakima, Washington; Say What? So it was even funnier when I went to the Rally Pan Am website which noted that Jonah’s Hometown was Ellensburg, WA, which makes his efforts even more impressive as there AIN’T a whole lotta Desert in Ellensburg! (Which is known more for its Rodeo) And although I recall Jonah’s DAKAR exploits last year where he had to retire due to a wrist injury, I paid little attention to him since after all he was ridin’ a “Scooter.” Yet Jonah is a very accomplished rider having won the Baja 500 twice along with finishing runner-up twice in the grueling Baja 1000, as the Ellensburg rider finished a very respectable seventh overall on his Privateer KTM 690 in his fourth DAKAR. (Although I’m certain he’s somewhat disappointed with that finishing position, eh?)

Cyril Despres of France won his third DAKAR in the Bikes category by 62+ minutes over Norway’s Pal Anders Ullevalseter with Chile’s Francisco Lopez third; having won three stages aboard hisAprilia RXV 450, as it was the Italian make’s inaugural running in the DAKAR.

As Despres has now won in Africa twice (2005, 2007) along with this year’s Argentina-Chile Rally Raid, while Three-time winner Marc Coma (2004, 2006, 2009) was 15th after being caught changing a rear tyre illegally during a Stage and being given a 6hr Time penalty for this infraction.

And although the Organizer’s had hoped to favour the smaller 450cc’s Bikes by placing Air restrictors on the (KTM) 690cc Bikes, to which KTM protested by not Officially competing this year, nevertheless 8 of the first 12 places were taken by KTM 690’s, which will be banned outright next year with only 450cc Motorcycles participating.

Meanwhile the hotly contested Car category became a battle of wills between el Matador and ‘Skeeter, as Volkswagen Motorsports Boss Chris Nissen was happy to let the Drivers compete for the overall glory without Team orders…

And although his lead was nibbled away in the closing stages, nevertheless former Two-time World Rally Champion Carlos Sainz won this year’s DAKAR over teammate Nasser Al-Attiyah by a very scant 2min 12 seconds behind Sainz with American Mark Miller finishing third overall (33mins adrift) giving the VW Race Touareg 2’s a clean sweep of the podium, as Volkswagen finished 1-2-3 in the Rally’s closest ever finish!

While Robby “Dirtmann” Gordon was his usual brash self, having wowed the fans with his jumping anticts at the races start and then delighting the huge crowds in Buenos Aires with a slew of “Victory” Doughnuts after having crossed the line in seventh place in his Monster Hummer and finishing eighth overall… Yet, I’m not sure how much of a friend he made with El Matador? As on Stage 12, Sainz who was starting in P9 was anxious to pass the “slower” vehicles in front of him to catch the disappearing Al-Attiyah, since after Gordon had let the Spaniard pass him, Robby decided he was going too slow and gave Carlos his patented “BAJA BUMP!” BOOM! Hitting him squarely in the rear… BASH! ‘Ol PT AIN’T GOT NUTTIN ON MEESE…

Thus reportedly as Sainz was doing a live French TV interview where Gordon walked up and slapped him on the back, Sainz simply walked off into the distance without a further word said, while Gordon immediately made hay for a SCORE Off-road event after finishing the DAKAR. Hey uze ‘RASSCAR BOYZ, you’d better watch out since reportedly bump Drafting will be reinstated this season…
Posted by Tomaso at 10:18 AM