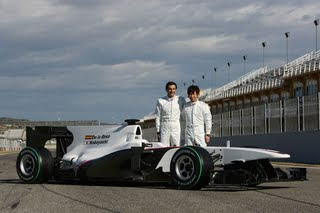 Staying true to its roots, the new Car sports a similar BMW-esqe blue ‘N white paint scheme and was presented devoid of any Sponsor decals, to which Peter Sauber stated he wasn’t worried… As I’d expect to see Japan’s Panasonic on the flanks of the new Racecar to coincide with new boy Kamui Kobayashi’s signing, while Pedro De la Rosa will be bringing Universia along with him, which just so happens to be associated with some Spanish Banking Company named Santander…