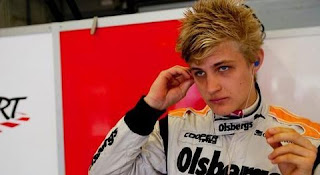 Having flown Across-the-Pond via the Polar Ice Cap route and elsewhere, Hopefully I should now be sitting comfortably in the Swedish countryside in the far away outskirts of “Waxoe-Vacs Joe!” Albeit I’m not sure if its as “Happening” as Cabo Wabo, eh?

Thus, I suppose I’d be somewhat remiss if I didn’t root for the ‘Swede’s GP2 Newboy Marcus Ericsson, who I’ve only learned about during my previous F1 Young guns testing stories last December.

Thus I’ve since discovered via Marcus’s website that he’s from Kumla, Sweden and only won his Formula Nippon Title in the series very last race, passing for the win with 5-laps remaining... And you’ve gotta like the Young Marcus who claims in his “Bio” that his picks for Racing Drivers are;

Favourite racing driver:“Michael Schumacher because he is the best and Heikki Kovalainen because he is cool!”
Yet Ericsson will have his work cut out for him in the Rarefied Atmosphere of GP2, as I’m certain that Ferrari’s Newboy Jules Bianchi is keen to collect the Crown and then head for a possible Sauber ride in Formula 1 next year, eh? And that’s not even mentioning the other talented Young Guns in the GP2 Championship this season...

Ericsson who’s Managed by some ‘Swede’s named Brack ‘N Co. will be racing for the Super Nova Racing Team, while Bianchi’s ART Grand Prix is always a series Frontrunner, not to mention I-Sport International...

You can catch the GP2 Season Opener via SPEED ‘N Elsewhere as it kics off its Twenty-Ten (2010) Season at the Spanish GP in Barcelona this weekend along with the inaugural GP3 Series debut.

So Good Luck Marcus!
NOTE:
By coincidence; American Racecar Driver Jake Rosenzweig rreplaced the Young Swede at Super Nova Racing for the final two GP2 Asia rounds during the 2009-10 Campaign after having previously tested for the Team during November 2009...
Posted by Tomaso at 7:59 PM