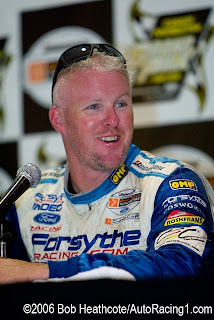 All joking aside... I just read that ‘Ol PT’s Numero Uno Fan from Up North Eh is busy drownding her sorrows... Over the fact that Mr. Chrome Horn will not be taking part in this year’s Indy 500, which does seem a travesty to Mwah, although I’m not sure if I’d like to see him ‘N KVRT pull a Conquest/Tagliani a la last May. I mean which of KVRT’s Driver’s would you unceremoniously pull? So I like Meesh’s idea better... As in putting The Thrill from the West Hill in a Dallara/Honda for Watkins Glen as a tune-up for Team Oh Canada’s two Home events; Toronto and Edmonton, which I’m hopefully gonna make the latter of in order to see Paul Tracy run ‘Juan last time, eh? Before hopefully he’ll make the 100th Anniversary Round 2 party next May!

And today marked the return to the Indiana Airwaves of JMV; NO! Not that JMV, the other JMV as in John Michael Vincent who thankfully takes over the Krabitz ‘N Eddie Radio Show with 1070 The Fan’s “The Ride” from 3-7PM Eastern. Although it was pretty funny to hear them play his old The Drive theme intro at the top of the hour whilst I was waiting for Indy Car Soothsayer guest Robin Miller, as I missed JMV’s interview with Tracy, where he claimed he’s never heard the KuhNuck so despondent, albeit less then 24hrs after his Nightmare... To which Miller interjected about the guile ‘O cruelty as PT was in Toronto today promoting the Indy 500; ZOINKS!

And I knew Tracy was in trouble when he responded to the Hippy Dippy Weatherman, a.k.a. Mr. BRUT Arute Arute regarding his custom ’64 Hot Rod Lincoln that he’d drug all the way out from Los Wages, that perhaps he should try running it instead to make the field! CRIKEYS!