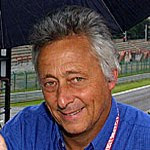 For Obvious reasons, your humble No Fenders Scribe has been keenly interested upon the latest goings of Air Travel to ‘N from Europe, especially since I’m trying to take a trip Across-the-Pond...

Thus this story recently grabbed my attention, even better yet coming from a voice of the past, as in a one Messer Bob Constanduros, who was the Original voice of Formula 1 to Mwah over one decade ago; Pre “House ‘O Windsor,” a.k.a. Peter Windsor... And I even had the privilege of having been lectured by Bob one fine evening prior to the Italian Grand Prix!

And it’s not surprising to have read upon the Blogosphere that Uncle Bernaughty, nee Mr. Bernard Ecclestone was the very first person home from Shanghai... In what was dubiously coined the “Volcanic Grand Prix,” something to do with owning his own Falcon Jet! To which le internets claim his ex-wife Slavica bought her own matching $36.5m Falcon Jet to celebrate their divorce back in ’09... While I’m sure emperor Bernardo’s is newer and also he apparently gave Master ‘Zebb (Vettel) a lift upon to Dubai; nice having friends in high places, eh?

So NO word on whether or not Messer Constanduros has finally made it back Across-the-Pond, as it sounded like he was getting a bit antsy... And hopefully I’m not jinxing myself by Scribbling ‘bout this, nor Mr. Constanduros, as I found it fairly amusing to read how Mark Webber had forgotten to take his Passport with him upon his return early morning flights from China; CRIKEYS!

Meanwhile as of Saturday, April 24th it was reported that only 44 F1 Personnel remained Shanghaied in China...