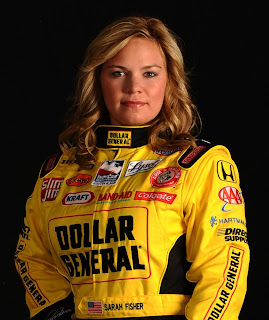 Surprisingly (NOT!) the Indy Racing League’s Numero Uno Female persona Danica Patrick has for the first time in her racing career heard a chorus of BOOS!

Yet, I first scribbled ‘bout the true Women in Racing back in 2007 when then a unheard of Three Females were to attempt racing at the Speedway for the very first time in the Brickyard’s history...

Thus, as previously noted, prior to ‘DanicaMania, the first women racers were in Grand Prix, prior to the modern day Formula 1 championship which began in 1950. As the Role Call denotes: Eliska Junkova, “Helle Nice” and Kay Petre. Then after the War, when the modern era of Formula One (1950 to Present) began, a further quintuplet of Females made their respective mark’s: Maria Teresa de Filippis, Lella Lombardi, Divina Galica, Desire Wilson and Giovanna Amati, before Janet Gutherie and Lyn St James invaded The Speedway. As Guthrie first accomplished the feat some 33yrs ago!

And although Sarah Fisher has driven both an Indy Car and formula 1 chassis, interestingly Wilson has the dubious honour of being the only Femme Fatale to date to attempt qualifying for both a Grand Prix and the Indy 500 without making either... And thus, we fast forward nearly another two decades from adventures past the dawning of a new chapter in Motorsports, as we prepare to see a potential Quintet le Females race at the Speedway this May!

And amidst posting my initial thoughts upon the IRL’s “Everybody’s A Winner – Trophy cups galore!” It would be overly easy to Pontificate about creating Trophies for: Fill in the Blank here... Best Road Ringer, Best Oval Head, and Oldest Driver, (sponsored by Ovaltinne) Best Teeth, (sponsored by Crest) Snazziest Racing Boots... Hmm? I’m guessing that Danny Boy “Spike” Wheldon would win the last two; Oh Never Mind... Yooze gets duh idea while I digress...

Yet, it never fails, as I was reading a Cold Track Days post awhile ago about Der Deutch TourenWagon Masters (DTM) race at the Hockenheimring, where I accidently discovered in P11 the name Susie Stoddart! Hang on a moment, eh? You mean there’s another female racing Tin tops in Europe?

And even better yet... Hey this ‘Juan’s too easy, eh? As DTM Debutant ‘DC (David Coulthard) found himself the meat in the sandwich of a Ménage à trois der Femmen Fraulein’s JA-JA! As Susie “Q” was P11, ‘DC 12th and Thy Leggy ‘Juan; Katarina Legge finished P13; Hya! As I still say its too coincidental that Susie’s last name is Stoddart which immediately makes me think of ex-Minardi F1 Team Boss “Aussie” Paul Stoddart... As in Good Day Mates! Err, was it good for uze ‘DC? And Poor ‘Ralfanzo, nee Herr Schumacher’s famous brother Ralf who misses out again by finishing ahead in P9...

Yet back to the Big Show this weekend in Indiana... Where Y’all gotta feel compelled for all of ‘Dem Females BESIDES Danica! As what does it take to replace a Wanderin’ Milka? Two Rookie Drivers... As in Simona-Simona ‘N ‘Bia! As once again AHEM! Simona de Silvestro (22nd) OUT-qualified ‘DannaWho... (P23) And this time on an Oval, which is supposedly Princess’s forte... Hey it’s NOT my Fault! Yet Ana Beatriz (21st) too qualified ahead of The Chosen ‘Juan, with only Sarah Fisher (P29) failing to make the Top 24 on Day 1.

As ‘Bia seeks to become a Full season competitor in the Big Carz ASAP, De Silvestro continues to shine for the Minnowesqe HVM Racing Operation and Sarah Fisher continues struggling mightily to keep her SFR Outfit afloat on its Shoestring budget which apparently took a big hit with Jay Howard’s Bump Day exit us!

And don’t forget ‘bout Pippa Mann, who just became the first Female ever to qualify on the Pole at Indianapolis, doing so for this year’s Indy Lights race, while after listening to an entertaining Autosport Radio Show interview with Carmen Jorda, was apparently given the weekend off in favour of Arie Luyendyk Jr.

So in the immortal words ‘O Eagles Front man Don Henley: GET OVER IT! (Danica) or more succinctly; Move along Doggie! As in why DON’T you just goes onto RASSCAR Full Time Yuhs Hear!

Now somebody pass me a Cheeseburger... And Good Luck Simona, Bia and Sarah!
Posted by Tomaso at 8:23 AM