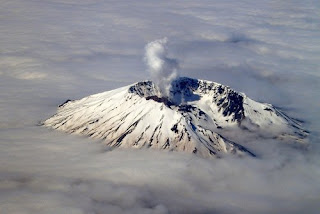 While Iceland’s Eyjafjoel Volcano is currently all the rage, pun intended... As I luckily escaped the continuing Mesopotamia the never ending Ash plumes are reeking upon European Air travel... As your Humble scribe’s first two flights from Stockholm and Rekevik were cancelled Friday, and then returning via London’s WACKO Heathrow Airport, I was informed that both it and Gatwick were closed once again Sunday, due to you guessed it!

Yet exactly thirty years ago today at 8:32AM Pacific, Washington’s Mount Saint Helens had a massive eruption of its own

Killing 57 people and removing 1,042 feet of the mountain’s dome along with creating a 1.0 mile Horseshoe crater which still exists today! And like most people, whom can recall exactly where they were during some of History’s oddest moments, your Humble Scribe can still recall exactly where I was when Saint Helens blew... As I felt the Volcano’s eruption all the way north in the San Juan Islands while casually commenting to my classmates; Uh Duh! The Mountain just blew... Without actually knowing this!

And I also recall that my “Padre,” who later went over to a Jobsite in Eastern Washington brought us all home samples of the volcanic ash that had blanketed everything which I kept in a clear plastic vile for several years before I think I finally tossed it...

The future of Mount St. Helens 30 years later
Posted by Tomaso at 8:06 AM