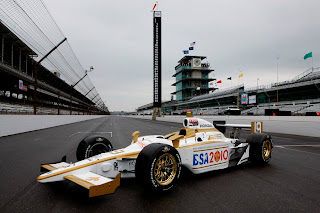 So in case you were unawares, Dale Coyne Racing has just unveiled Alex Lloyd’s Boy Scouts of America 100th Anniversary livery for this year’s Indy 500, as the No. 19 Dallara/Honda/Firestone entry will feature this white ‘N gold paint scheme.

Alex Lloyd“This is amazing to be a part of history, and driving the 100th Anniversary car in this year’s Indy 500. . . . In my wildest dreams, I would never have imagined from when I was a Scout in England 15 years ago, that I would be driving the Boy Scouts of America IndyCar, let alone during the BSA’s 100th Anniversary.”

Hmm? Why does the “Handle” BSA make me think of a long forgotten Motorcycle?

Fast Friday
For those of you Indy Car Diehards... You may wanna set them recordin’ devices to catch the Fast Friday action on Versus; 12:30-2PM. They’ll also be covering this weekend’s riveting Qualifying action with Monster Airtime; 8AM-3:30PM Saturday & 9AM-3:30PM Sunday, as I for one WON’T be bothering to try listening to the IMS Radio Network via Indycar.com this weekend...

ALL TIMES PACIFIC – ALWAYS CHECK YOUR LOCAL LISTINGS!
And yeah, its only practice, so I don’t know whose getting the proverbial “Tow” around the Speedway, etc, as SHOCKING! Scott Dixon has been the Fastest Man on track the last two days... Although I have to say ‘TAG, nee Alex Tagliani has been looking good, especially whilst fighting a lingering case of Bronchitis; and how ‘bout that Hideki Mutoh, eh?

Day 5 Practice Results
Posted by Tomaso at 6:21 AM