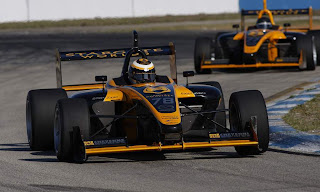 This year’s Rookie IndyCar class is filled by 4 full time participants, 1 partial season, 1 potential competitor and 1 Indy Only competitor... As De Silvestro, Romancini and Sato will contest the entire 17 race schedule, with Baguette having come onboard for the entire season after missing the first two events. Howard currently has a 5 race deal while Beatriz makes only her second start at Indy and is in search of more races in the future. And Saavedra is a “One-off” for this year’s Indy as he hopes to capture the Indy Lights title this year in his sophomore season.

Bryan Herta AutosportSebastian Saavedra: Columbia (No. 29)
This 19yr old Columbian Teenager is currently contesting his second Indy Lights season after having finished as the rookie of the Year in 2009, finishing third overall and capturing two wins while driving for AFS/Andretti Green Racing. His first win came in only his fourth start on Kentucky’s Oval, with his second win coming on the Streets of Toronto.

Sebastian began his racing career in the traditional European manner of go Karting before moving up to Formula BMW Single Seaters in 2007. He has raced in a variety of Formula BMW Championships, including USA, Germany and Asia, along with capturing four victories. He also finished runner-up in the 2008 ATS Formel 3 Championship with three wins.

Currently Saavedra is part of ex-IndyCar Driver Bryan Herta’s two car Indy Lights Team, partnered with BRIT Stefan Wilson, hoping to contest for this year’s title along with graduating to the ‘BIG BOYZ in the future with BHA.

Conquest Racing
Mario Romancini: Brazil (No. 34)This 22yr old Brazilian has had a very fast rise thru the ranks of Open Wheel Racing, having only begun his Single Seater career in the Brazilian Formula Renault series in 2006. The following year he was South American F3 series runner-up before graduating to World Series by Renault. (WSR)

For 2009 Mario switched to the Indy Lights Championship with Anderson Racing and in his fifth start from Pole, scored his maiden FIL victory on the Milwaukee Mile. Romancini took his second Oval track victory at the season finale in Homestead before bolting to the ‘BIG BOYZ for 2010. I’m sure it had to be very emotional for Mario to be making his Indy Car debut in his Hometown of Sao Paolo this past March.

Bertrand Baguette: Belgium (No. 36)
This 24yr old Belgian is the reigning World Series by Renault (WSR) Champion, having begun his climb up the Formula Renault ladder in 2004; progressing from their 1600cc category to the 2.0 Formulae before entering the top rung (3.5 liter) in 2007. Then in Twenty-oh-Nine Bertrand clinched the WSR Title by 57 points over current Lotus Racing F1 Test/Reserve Driver Fairuz Fauzy.

Baguette (whose name just gottas makes Yuhs Hunker for a Sandwich, eh?) was awarded Formula 1 Testing opportunities this past winter with Renault and BMW Sauber during the “Kindergardn F1” sessions and boldly stated he was 96% sure of claiming the second Sauber F1 seat which subsequently went to Pedro De la Rosa instead…

Baguette has since brought Royal Automobile Club of Belgium sponsorship in tow with him to Countryman Eric Bachelart’s Conquest Racing Team, making his Indy Car debut at Barber Motorsports Park in Alabama.

For an entertaining Q & A session with Messer Baguette, along with a video featuring both of the Conquest Drivers during the Long Beach weekend; See; Getting to Know Bertrand Baguette...

Dryer & Reinbold RacingAna Beatriz: Brazil (No. 25)
Also known as “Bia,” Ana “Bia” Beatriz Di Figueiredo is a 25yr old Brazilian who like Mario Romancini is also from Sao Paolo and she too had the honours of beginning her Indy Car career on her Hometown Streets of Sao Paolo earlier this year.

Bia also was the very first Female to ever win a Firestone Indy Lights Race when she took the chequered flag at Nashville Super Speedway in 2008, while finishing third overall in the series garnered her Rookie of the Year Honours. Bia returned for a Sophomore Indy Lights season with Sam Schmidt Motorsports and won her second Oval track race at Iowa, although funding issues beset her full season campaign. Beatriz is managed by former CART Racer Andre Ribero and Obviously; SNAP! Hopes to become a full time Indy Car Series racer in the near future...

HVM Racing
Simona de Silvestro: Switzerland (No. 78)
What can I say about the 21yr old “Swiss Miss” which hasn’t already been said in the Blogosphere? Actually, Simona is of Italian-Swiss descent and now resides in the Valley of the Sun, like someone else named Princess Sparkle Pony...

De Silvestro began her Open Wheel Racing career by contesting the Italian Formula Renault series in 2005 before switching to the Formula BMW USA series in 2006. Next Simona moved up to what was once known as the Toyota Atlantics, making her series debut for somebody named Derrick Walker in ’07 before becoming ONLY the second Female to EVER win a series race by capturing the 2008 Long Beach event, joining the “Other Danicker...” As in the Champ Car World Series Dan-Dan-Danica... Better known as Katherine Legge, who sadly never got her chance to compete at The Speedway...

After her maiden Atlantics victory with Newman Wachs, De Silvestro became the storied Open Wheel Racing series All Time Female victor with the MOST wins (5) in the now apparently Defunct Atlantics Championship... Having captured a further four wins with Team Stargate Worlds along with Coming within a whisker of winning the Title last year before falling out in the Season Finale at Laguna Seca and winding up third in the final standings...

KV Racing Technology
Takuma Sato: Japan (No. 5)
The 33yr old Japanese “Rookie” hasn’t exactly had an easy introduction into the world of Indycarz... As this likeable Japanese Open Wheel Racing Star began his career in the not so traditional world of Bicycle racing before making the jump to Go Karts at the relatively late age of 19, before leaping into the All Japan Formula 3 series in 1998, but “Taku” then broke his contract at mid-season in order to pursue a racing career in Europe instead, finally settling upon competing in the British Formula 3 Championship. For the 2000 season Takuma finished third before claiming the title the following season and winning an impressive 16 races between 2000-01.

For 2003 Taku-san moved to the BAR-Honda Team as its Test Driver before replacing the sacked Jacques Villeneuve “Just-in-Time” for the season ending Japanese GP where he finished sixth, before becoming Jenson Button’s teammate the following year. Ironically Sato garnered his only podium finish at the 2004 USGP at Indianapolis where he came home third, as ’04 was to be the High-water mark for the Team in all of its various BAR/Honda guises, finishing runner-up to Ferrari in the Constructor’s Championship.

After a dismal 2005, Sato was replaced by Rubens Barrichello in the new Honda “Works” Team, opting to race instead for Aguri Suzuki’s hastily set-up “B-Team” which was commonly known as “Super Best Friends,” nee Super Aguri, where Taku performed admirably from 2006-08 when the Team was shut down due to lack of finances... With Sato scoring the squad’s only Grand Prix points.

Unfortunately for 2009 Sato was unable to secure a ride before finally landing a seat at KV Racing Technology for this year’s IZOD IndyCar Series and is running perhaps the favourite chassis in the paddock, the classic green & gold Lotus Cosworth Engineering Dallara/Honda...

Sarah Fisher RacingJay Howard: Great Britain (No. 66)This 29yr old Briton made his initial trek Across the Pond some six years ago when he made his U.S. Formula Ford Zetec Series debut in the middle of 2004, capturing his first victory at Sebring. For 2005, Jay thoroughly decimated the field by winning nine events, including six in-a-row enroute to winning the Rookie of the Year and Series Championship.

For 2006, Sam Schmidt naturally opted for the Briton who rewarded Sam by winning the then Indy Pro Series on the back of two victories in his inaugural season.

Unable to catch the eye of any potential Indy Car Owner the following year, Jay took a three race gig in the Indy Pro Series before Marty Roth inked the Englishman to a ‘Big Boyz ride for the following season.

Unfortunately Jay’s Rookie season in IndyCars didn’t go exactly as planned, when Howard was abruptly dropped during the Month of May to make way for Paying Driver “Gentleman John” Andretti, whose one race deal mushroomed into several more races before Howard made his fourth and final start for Roth Racing at Watkins Glen in 2008.

Trying to rekindle his Open Wheel Racing career, Jay returned to what had now become the Indy Lights for 2009 with Start-up Team PBIR, before running into funding issues once again. Yet Jay has now landed a partial season ride with Sarah Fisher Racing, with five events currently on the 2010 calendar and potentially more.

Yet his 2010 campaign has gotten off to a somewhat shaky start, as Jay first crashed out at Kansas, which was the Team’s warm-up for this year’s Indy, where Jay failed to qualify upon the Team’s last minute decision to withdraw his time and hopefully re-bump his way into the field which he was unable to do.

Yet I’m confident that Third Time will be the Charm for this witty Englishman when he finally Cracks his Quallie Duck at The Speedway in 2011 during the 100th Anniversary; The Centennial Years - Part III...
Posted by Tomaso at 10:35 AM