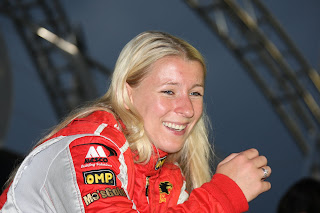 (Pippa Mann, Sam Schmidt Motorsports)
While the spotlight has thus far shone brightly upon ‘The Big Boyz, nee Indy Car with what actually was a very enjoyable Qualifying weekend, which even had real Bumping, albeit only four cars and not the massive seven promised... Don’t forget that there are other events this week at The Brickyard, namely the Firestone Indy Lights centerpiece, the Freedom 100, as I DON’T have any interest in the FRILLIN’ Pitstop Challenge! Although I’m guessing that Classic Rocker’s ZZ Top will put on a great show as always...

And with the plight of Paul Tracy’s unceremonious failure to qualify for this year’s Indy 500, it’s somewhat ironic that ‘Ol PT was being crowned the Original Dayton) Indy Lights Champion 20yrs ago, eh? As Tracy wasn’t the only ex-Feeder series standout to miss the big dance, as two other past Champions named A.J. Foyt IV and Jay Howard didn’t make the cut either.

But now onto this year’s event which I’m looking forward to watching on Versus, as I’m picking The Mayor of Hingetown to be in the Catbyrd’s seat and win the race... As you’ve gotta think that James Hinchcliffe has the upper hand upon the upstart Rookie J.K. Vernay, who I believe has never raced on an Oval... Although Arie Luyendyk Jr. is making a guest appearance with Anderson Racing, which could make things interesting, not to mention “S-Squared,” (Sebastian Saavedra) “Plowie,” (Martin Plowman) and Charlie Kimball, while I suppose Dan “Speedy-Dry” Clarke may have an outside shot? Or perhaps even Junior Strous? As apparently Joel Miller’s efforts failed and Ryan of Junior Open wheel Talent has just told me he’s focusing upon a later race date, while also informing me that Jeff Simmons is driving for Team E and Wade Cunningham is back with Sam Schmidt Motorsports... So it should be a good race like always, so check it out this Friday at 9:30AM PACIFIC on Versus...

Pippa Mann wins Pole Position for Freedom 100
Posted by Tomaso at 11:15 AM