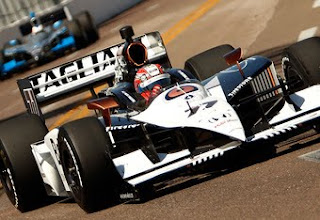 So I’d have to admit that it was a pretty entertaining weekend at The Speedway and that the new Top 9 Shootout format actually seems pretty good to me, especially since it seemed like the whole days activities were compressed, thus in turn giving us continuous action upon the race track.

And there definitely were countless “Storylines,” eh? As I’m still a bit surprised that Paul Tracy didn’t make the cut, even more surprised that he was the only one of KV Racing Technologies four Drivers having his dance card punched... As I’m guessing that Kevin ‘N Jimmy aren’t exactly pleased with their repair bills, as three Drivers crashed cars along with two Gearbox malfunctions during Qualifying runs.

Not to mention the multiple tribulations of ‘TK, as I’ll skip joking ‘bout his nose getting in the way... Butt! Kanaan certainly didn’t have the sort of weekend he was expecting, having crashed two days in a row in nearly the same spot before gutting out a late afternoon qualifying attempt to wind-up in P32!

Or how about “S-Squared” (Sebastian Saavedra) making the race even after having crashed Bryan Herta Autosport’s lone Racecar while sitting On The Bubble; before PT ‘N Jay “Funnyman” Howard both withdrew their times and ultimately took themselves out of this year’s Indy 500. Then in the Post-Qualifying wrap-up Messer Herta got in the best Quip of the Day by referring to his Minnowesqe BHA Team as Two Men and a Truck Racing; Hya!

And as much as I’m impressed by TAG’s performance all last week and in Saturday’s action, I’m GASP! Even more impressed by Bruno “Ice-Ice, Baby!” Junqueira’s performance on Sunday, as Junky simply ran around for a mere six laps then went out in oppressive heat and uncorked a masterful 4-lap run of 225.662 mph... Which, Ahem! Was FASTER then You-know-who’s time; being fastest of the day! So way to go Bruno...

Not to mention Conquest Racing’s two Newboyz making the race, as somewhere on the Blogosphere I read that neither would make the grade this weekend, although I myself only got 1 of 3 picks correct, as Milka-licious was probably a Slam Dunk, eh? Although I did say SFR, just not Jay, but his boss Sarah instead...

So now we anxiously await the 94th Running of the Indy 500, where Alex Tagliani in P5 is the highest placed NON-Big 3 entity and seemingly is the only outside opposition to another red car winning, i.e.; Penske or Ganassi... OOPS! That’s right, the Penske’s are NO longer in those traditional BAD HABITS colours... And The Graminator sez DON’T forget ‘bout me, while I’d personally enjoy seeing Alex Tagliani, or Davey Hamilton, Ed Carpenter or Tony Kanaan drink the milk on Sunday, with Simona-Simona taking Rookie of The Year Honours...

Team-by-Team
(3) Team PenskeNot overly shocking that The Captain once again won the Pole, P2 & P4, narrowly missing out on another Front row sweep, and I’m picking Will Power to steal the borg Warner Trophy away from HULIO...

(2) Chip Ganassi
Did ‘Cheep show his true colours by accusing Roger of playing Dirty Pool in the dying moments of the Top 9 Shootout, where his two Drivers wound up P3 & P6.

(2) FAZZT Race TeamThis is my Cinderella Team for the Month of May, as ‘TAG was impressive all week prior to Pole Day Qualifying, being the Top NON-Big 3 runner with added second car entry Bruno simply amazing with his Sunday heroics, with the fastest speed of Day 2. Tagliani starts P5 & Junqueira rolls off P25.

(1) Rahal-Letterman
Father Bobby ‘N Son Graham unite in a “One-Off” effort that sees the “Graminator” garner the Kardashian’s a Top 9 Shootout position with the Son ‘O Stash in P7.

(2) PantherSurprisingly the Team’s mainstay, its lead driver Danny Boy “Spike” Wheldon got his ARSE kicked by “Indy Only” partner Ed Carpenter in the “Fuzzy Wuzzy” (Zellar) Drinks Car with an excellent 8th place run, while Weldon rolls off P18.

(1) Newman HaasThis once mighty Racing Team was unable to put together a last minute deal to run Oriel Servia alongside Hideki Mutoh who did a very good job for the faltering Team by claiming P9 on Saturday.

(1) Sam Schmidt/CGR
This pseudo Third Chip Ganassi ride in cahoots with Sam Schmidt saw Townsend Bell put in another strong performance, just missing out upon the Top 9 Shootout, after having not driven since last May and will start in P10.

(2) De Ferran Dragon
This single Car Team added perennial Oval Driver Davey Hamilton to its lineup for a three Race effort, but it was the Team’s Fulltime Driver “Rafa” who came out on top, as Rafael Matos starts P12 and Hamilton P14.

(3) KVRTObviously the most disappointing aspect to this Team’s Indy outing whas that “Mega” Fan Favourite Paul Tracy did NOT make the show... As Mario Moraes was the quickest of the squad’s remaining three cars, E.J. Viso was pretty quiet and Rookie Takuma Sato snuck in late afternoon Sunday. Moraes rolls off P13, Viso P19 and Sato P31.

(1) HVMThis ‘lil One Car Team just keeps impressing, as Rookie Simona de Silvestro once again starts AHEAD of ‘DannaWho, with Simona rolling off from the inside of row 8 in P22.

(2) Conquest
Great performance from another Minnowesqe Team, as Eric Bachelart’s squad of Rookie Driver’s both made the cut, with Bertrand Baguette P24 and Mario Romancini P27.

(1) Dale CoyneThe little Team that could was unable to get Fan Darling Milka-licious into the Big Show this year, as Duno was simply off the pace... While the Team’s “Second” Driver Alex Lloyd makes his third I500 by rolling off in P26.

(1) Sarah Fisher
While it seemingly was Team Boss Sarah Fisher struggling to find speed all week long, with teammate Jay Howard quicker, it wasn’t to be upon withdrawing Howard at the final moment, as he was the last Racecar on track but unable to “BOOMP” his way back into the 500 and hence Fisher will start P29 while Howard once again is left scratching his head...

(1) A.J. Foyt
After Grandson “Quattro” told ‘Super Tex his Dallara was a PIG, the elder Foyt sent him packing and replaced him with Jacques Laizier on Sunday morning, all for naught, as just Vitor Meira made the field in P30 for Foyt’s Racing Team this May.

(1) “Two Men ‘N a Truck” Racing (BHA)
Best Quip of the weekend from Indy 500 Debutant Team Owner Bryan Herta, as his Rookie Driver crashed their lone Dallara at 4:50PM ET in an effort to protect his vulnerable Bump speed. Yet with Conquest, KVRT and SFR all withdrawing faster Racecar’s, Sebastian Saavedra got the news from Methodist Hospital that he’d made the show in P33!