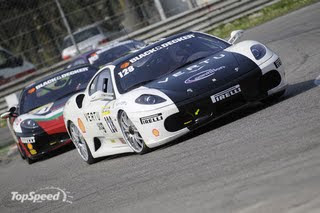 Sharp got a very brief chance to talk about his new team which is apparently running a brace of the Scuderia’s F430GTC’s in the hotly contested GT2 class, as Scott’s team prepares for this Saturday’s upcoming 58th running of the 12hrs of Sebring.

Sharp will co-drive his F430GTC with Dominik Farnbacher And Johannes van Overbeek, While his team’s
Second racecar will feature Ed Brown driving with some guy named Joao Barbosa and Guy Cosmo, as you may recall that Barbosa won this year’s Rolex 24 aboard the unsponsored Action Express Daytona Prototype.

Barbosa and Farnbacher have been drafted into the team for just the Endurance events at Sebring and later-on at Petit Le Mans, while Brown who’s slowly working his way up the ranks of Amateur racing drivers also just happens to be the President & CEO of Tequila Patron Spirits, which has also signed on to be the ALMS Title Sponsor this season.

You can check out Sharp ‘N Co’s brace of red cars prepared by Maranello’s Ferrari Corse Clienti going head-to-head with Meesh’s favourite Team Owner Boobie Ray-X’s (Bobby Rahal) BMW squad this Saturday on the SPEED Channel, who’ll be broadcasting the majority of the race...
Posted by Tomaso at 9:21 AM