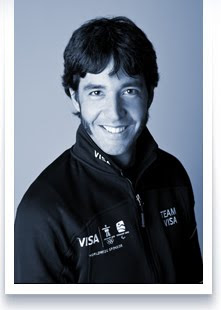 Otay, so I’ve waited until Canada’s euphoria over winning the big ice match has hopefully somewhat subsided, as I’ve tried to keep from getting overly emotional about this, BUTT! As a visually impaired ‘Vurd Botcherer, nee Hack, Scribe or Blogger… Take your pick; I’M PISSED OFF at Canada!

While the country above me reveled in the ecstasy of winning the big Hockey game… I’d been counting down to the day’s other race on the final day of the Winter Games, the Men’s 50k Cross Country event that was to potentially see history being made when the very first Blind Athlete, nonetheless from Canada competed in the Alpine event, after Calgary’s Brian McKeever had been selected as a member of Canada’s Olympics’ squad by winning an able body qualifying event…

Thus, upon going from the highest high’s of staying up late to see The Peacock, nee NBC milk the SHIT outta Steve Holcomb ‘N Team USA winning Gold aboard the Night Train, I’d learned that Brian McKeever had been told on the eve of his historic outing, that he’d been given the ‘Boot and wouldn’t be competing in the following day’s Men’s Cross Country relay…

So all I can say which is PG-Rated is SHAME ON YOU CANADA! As they claimed it wasn’t a Publicity Stunt by selecting the Blind Athlete as a member of their Team… But then when it came down to brass tacts, sorry Brian, but we really wanna win the event and you’re our weakest link!

This coming from a nation who created the Terry Fox award for these very Olympics, which was co-awarded to Joannie Rochette & Petra Majdic for demonstrating the enduring spirit of Mr. Fox, (not to mention Canada’s other national hero Rick Hansen…) along with the host city itself having elected a wheelchair bound Quadriplegic named Sam Sullivan to be its Mayor when the Winter Games were initially awarded…

So, in case you cannot tell, I have a really big problem with Canada’s attitude towards denying Brian McKeever his place in the History Books, along with getting to play in the snow enroute to becoming the very first Blind Athlete to compete in the normal Olympics, which I’ve naively thought was the whole spirit of the games, yet I’ve obviously come to understand their true meanings by dubbing them the COMMERCIALYMPICS!

But I’m still extremely disappointed by Canada, who I’ve come to believe is a very progressive nation, while I’m touched by McKeever’s continuous uplifting spirit, while although he only has 10% of his normal vision remaining, nevertheless, he had his sideburns fashioned into Hockey Sticks! (Talk ‘bout national spirit, eh!) While his older brother marvels at his tenacity to pursue his dream of making the Olympic Team by persevering through the chilliness outdoors whilst riding the bus to and from weekly practice sessions.

For a Legally Blind Cross-Country Skier, a Triumphant Perspective

Oh Whale, hopefully Brian will kick ARSE in the upcoming Kuh-Naidiun Paralympics which run from March 11th thru March 21st.

And ironically, or was that karmically? I’m told that on the day in question, the weather was so bad (foggy) that they were probably ALL skiing blind!

And whilst surfing le internets for another photo of my new “Role Model,” I was very disturbed to have the very first story to pop-up, regarding Hate Mail being sent to McKeever’s Olympic teammates… As after all it was NOT their faults, it was the Canadian Olympic Team Organization’s… As I’m NOT even sure I can blame their coach for making the decision to exclude McKeever, eh?

So Good Luck Brian!
Posted by Tomaso at 8:28 AM