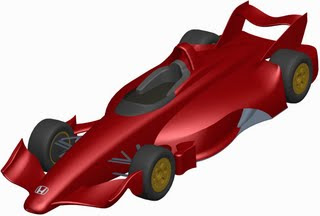 Coming live from its Bat lair situated somewheres in Indiana… The “5th Wheel” of New 2012 Indy Car’s has finally tipped its hands by releasing the rendering above, along with the launching of it’s new website/blog page, as the story was originally broken by Racecar Engineering.

Fifth firm to reveal Indycar 2012 concept next week
And I’ll defer to “Mr. CHiPs, nee Chris Estrada’s post for more background on the project, since he’s gone to the effort of divulging the image and website info for this story.

The BAT soars
And although I’m adamantly against the notion of covered wheels, wheel fairings or in the BAT’s case the boxed in sidepods, nevertheless I have to say I like their sketch way better then the Delta Wing’s.

Yet I’m not sure why this just finally hit me, or that I haven’t heard one single discussion over it, BUTT! How in the HELL are they gonna do those “lightning-fast” Pit stops with covered rear wheels? I mean how do you change tyres? As in has anybody looked into the problems Formula 1 had recently with its now fortunately BANNED wheel spats… Which were intended to provide front brake cooling, yet caused several tyre issues, as in those black majik rings disembarking the chassis… So, this seems like another potential recipe for problems… And what happens if/when a tyre bursts during racing, as in isn’t this just another way of potentially introducing more shrapnel to be discarded from the chassis, although I’d have to assume this has already been studied?
Posted by Tomaso at 10:20 AM