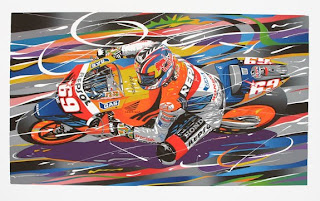 (Nicky Hayden; Source: Randy Owens.com)
This weekend the 62nd FIM World Championship will kick off its season with its now traditional night race under the Desert Stars of Qatar at the Losail International Circuit.

Look for a field of 17 riders to contest the season, with 16 of them trying to knock “The Doctor,” a.k.a. Valentino Rossi from his perch of invincible World Champion...

As the diminutive Italian will make his Championship defense aboard his No. 46 FIAT-Yamaha with Spanish teammate George Lorenzo nipping at his heels, as Lorenzo tries to finally wrestle the crown away from Rossi, who’s miles ahead with an astounding 103 wins from 227 starts, complementing his massive seven Top-rung MOTO GP World Championships... (9 total including 125GP & 250GP)

Ducati Corse’s Casey Stoner seems to have recovered fully from his unspecified illness last year and was fastest in the final Pre-season test session in Qatar, whilst seeking to win his fourth night race, not to mention taking back the title, while “The Kentucky Kid,” nee Nicky Hayden returns as Stoner’s teammate for his Sophomore season with the Italian concern.

Other potential race winners probably include the Repsol Honda duo of Andrea Dovizioso and Dani Pedrosa, While Pedrosa could even be a potential World Champion Dark horse?

Interestingly, Edwards is the oldest of the trio of American riders at 36yrs old, with Hayden next at 28yrs old and Spies the “Baby” of the group at just 25 years young.

Yet only Hayden has captured the No. 1 plate to date, winning the World Championship back in 2006 for Honda, while Edwards and Spies still are chasing the extremely elusive crown.

Colin Edwards
Nicknamed the “Texas Tornado,” Edwards began racing in MOTO GP in 2003 and finished 5th in the Championship last season thanks in part to Spies finishing ahead of his rival in the final round of last year’s Championship, as it’ll be entertaining to see who wins the battle between the Texas Twins...

Ben Spies
Spies’s nickname is “Elbowz” due to his elbows out riding style... Yet the 25yr old has a very impressive pedigree, having won the AMA SuperBike title three years in-a-row; 2006-07-08 before winning the World SuperBike title in his rookie season last year. Spies made three Wildcard MOTO GP starts in 2008 before an additional start at the Season Finale last year and has scored three Top 10 finishes out of these four starts...

Nicky Hayden
Known as “the Kentucky Kid,” Nicky is the only rider of this American trio to have won races and a Championship, yet he was vastly overshadowed by his Aussie teammate Casey Stoner last year and is hoping to have a better season in 2010, albeit Hayden did snatch a much deserved third place finish at Indianapolis last year...

So nicely timed was Hayden’s appearance on Wind Tunnel this past Sunday night as a precursor to this weekend’s race outing which I’ll be tuning into at 1PM Pacific on SPEED. As it was interesting to hear Nicky discuss how the Ducati’s carbon fibre frame is a whole different animal compared to his earlier Honda days... And contrary to popular belief, you cannot simply out-muskel the ‘DUC and instead need to use an incredible amount of finesse to coax the maximum performance out of the bike, which is totally different then he’s used too, but he’s learning to adapt and hopes to do much better this Sophomore season with the Italian concern.

For humour Dave Despain prodded him on whether or not he’d gotten any phone calls from Maranello about a future four wheel career after having beaten the Ferrari “Stud’s” in the annual Ducati-Ferrari winter Go Karting event...

Yet I’m curious to see how the little known (Privateer) Satellite squad Pramac Racing Team fairs with its GP10 “Duc’s,” (Ducati) which will be campaigned by Finland’s Mika Kallio and Spain’s Aleix Espargaro...
Posted by Tomaso at 12:41 PM