The Duno factor or Milka way? 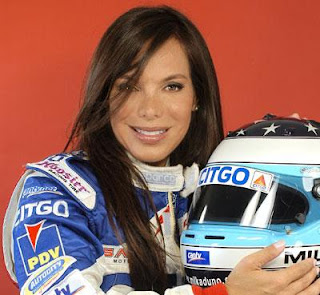 So there certainly seems to be a lotta conjecture over a one Misses Milka Duno; Multiple Master’s College Degrees, Children’s Book Author, Venezuelan Sports Personality of the Year and noted Indy Car Driver...

And it’s somewhat entertaining to think that fellow Blogger George Phillips of Oil Pressure has come under such acrimony over his comment towards it being time for Milka to PARK IT... While I’ve had fun with the subject by denoting Milka-licious as The Wanderin’ Milka and Nary-a-Peep!

What is the Role of a Blogger?
Is Duno out of her league? Whale I must say that I’ve never-ever heard of an Indy Car being SLOWER then the ENTIRE Indy Lights field in my life! Yet, then again Milka was ultimately only 4 seconds adrift a lap before either being ordered to Park or retiring from “Handling” issues during last week’s Long Beach Grand Prix; So - You make the Call... As in the words ‘O RASSCAR, could that be the Indy Racing Leagues version of “Start ‘N Park?”

And my favourite Robin Miller quote of late is his claiming that while ‘Roundy-round may have the Lucky Dog, Indycarz has the Lucky Milka!
But as far back as I can remember from the Way-back machine... There have always been Backmarkers, Rolling Chicanes or whatever Y’all wanna call ‘em... HELL! Recall the Folklore behind how proverbial Tail Gunner Charlie Hiro Matsushita got his revered nickname of ‘KING HIRO! And that’s not including all of Dick Simon’s Drivers, (or Dick himself) or the multiple guises of Dale Coyne and Kenny Bernstein’s Operations thru the decades... While the IRL circa 1996-06-ish is vastly unknown to Mwah, due to some ‘lil thingy known as The Split!

And while I’m NOT comparing the two Females skills driving-wise, it is interesting that Sarah Fisher decided to insert Graham Rahal into her Racecar for the last three Twisties, due to her noted slower pace upon the Road/Street circuits... While I’d have to say “Stash Jnr” didn’t exactly light the world on fire during these, eh?

And finally, once again while NOT drawing ANY comparisons... Has anybody noticed the mumblings over the three Newboyz Formula 1 Teams this season? As there was great conjecture made over Hispania Racing being some 10-12 seconds a lap off the pace in the Season Opener... Which while these Organizations particularly are HURT by the lack of in-season testing, I believe that the Lotus, Virgin and even the Hispania Cars are now within only 4.5-5 seconds a lap off the pace and steadily improving!

And thus we come full circle back to Milka-Milka-Milka... Who in her defense has never contested either a Full Season in Indy Cars nor contested any of the Street Circuits and Road Course to date and hence is in a very steep learning curve... So, should she have her Ticket punched? Or let her continue trying to move forwards... All I can say is Milka duno is sure a HELLUVA Easier on the Eyes then Marty Roth ever was, eh?
Posted by Tomaso at 9:13 AM