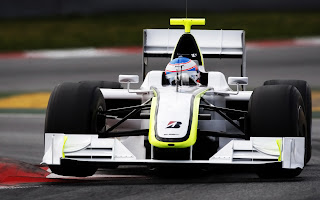 So I musta been already sufferin’ Formel-einus (F1-withdrawals) eh? As for humour I randomly selected a Formula 1 video tape from Ye No Fenders stockpile and punched the Play button, (prior to last Christmas – which seems like such a LONG time ago...) albeit, in-between these riveting notes I’m furiously poondin’ out on mize keeboards; Hya! Having first sat down to watch the ’09 Australian GP: CRIKEYS! Err, Uncle Albert – We’re so Sorry... Uh, Albert Park weekend action way back last December (12/04/10 ...)

Having become distracted a further Fortnight before forcing myself to sit down ‘N watch the BLOODY ‘Qualie session – as I’m guessing it was Karma that brought me to randomly select this tape, eh? As hopefully I’ve just winged ‘Meeze ways Down Under to BLOODY Australia... NO Polar Ice Cap route this time – instead I’m traveling to Australia via New Zealand; CRIKEYS MATE! As I still CANNOT believe I’m going to attend this year’s Australian Grand Prix; SHEISA!!! But I digress...

Back to le Memorex, eh? As I’ve already forgotten most of the SPEED Friday Free Practice 2 banter – other than how strange ‘N refreshing to hear the sardonic tones of the House ‘O Windsor reporting from Pitlane; be still my beatin’ heart - weese MISS Yuhs Peter!

Along with the ceaseless prattling on ‘bout those Roguish Double Diffuser Outlaws – who’d supposedly circumvented the Sporting nature of the new for ’09 FIA Rules. (Sound familiar? As in front engine blown exhausts, etc)

And thus, we ended the day with a most unusual lineup at the top ‘O the Timesheets; as Nico Rosberg driving for “Team Willie,” a.k.a. Williams F1 was the day’s fastest runner. Followed by BRAWN GP’s ‘Rubino, (Barrichello) Toyota’s “Trulli Scrumptious,” (Jarno Trulli) Mark Webber’s Red Bull, ‘JENSE’s (Button) BRAWN BeeGee-ought One (BG01)The Glockster (Timo Glock) in the second Toyota, “KAZOO” (Kazuki Nakajima) in the ‘Seester Williams, Master ‘Zebb (Vettel) in the ‘Seester Red Bull, Adrian Sutil’s Force India and Felipe Massa’s Ferrari rounding out the Top-10 respectively. As its worth noting that six of the first seven spots (excluding Webber) were occupied by the Double-stuff Diffuser teams, nee Williams, BRAWN & Toyota...

It’s just so FUNNY hearing SPEED’s Bob Varsha call Team Willie, (Williams) BRAWN GP and Toyota Diffuser Outlaws... Which is exactly what he named them during the opening stages of the ‘Qualie Q1 session.

(And where-Oh-where does the time GO, eh? As a further 5-weeks on – I’m tryin’ tooze readz my Chicken-scratching’s taken whilst watching le Memorex...)

Jotting down how it seemed like a different era as Messer Windsor interviewed the Boyz ‘bout the new look tyres and their thoughts upon them; to which the young Louise ‘JAGUAR didn’t seem too indifferent ‘bout – just more contact patch area to work with.

As it struck me as odd to see Ferdi-the-Putz (Alonso) chiming back at Peter resplendent in a colourful Renault cap, Jarno Trulli in his white & red Toyota garb, The Krakow Kid (Robert Kubica) in his white & blue BMW-Sauber duds and The Hamburgular, nee Sebastian Bourdais of Scuderia Toro rosso fame; whilst my notes claim Rosberg P1, Trulli P2 and ‘JENSE P3... Perhaps the outcome of the final Free Practise session, eh?

As The Kimster apparently experienced the high’s ‘N low’s of qualifying, as Raikkonen briefly vaulted to P1 before dropping all the way backwards to 14th, whilst teammate Felipe Massa was briefly in 15th before hauling himself further up to move onto Q2. Fred Alonso was down in 12th while defending World Champion Lewis Hamilton sat on the bubble in P15!

In the Q2 Qualie session, the BRAWN’s further flexed their new found muskel’s by becoming the first two cars to dip below the “25” bracket, as in 1-minute 25-seconds for the first time in five years! As Rubino uncorked a 1:24.7 with ‘JENSE a single tenth behind at 1:24.8. So much for reducing the car speeds with the raft of Aero-changes, eh?

As SPEED’s Bob Varsha quipped: When was the last time you saw two World Champions eliminated from Q2! As both McLarens failed to advance, along with Alonso missing the cut... As Hamilton never even attempted a single flying lap during Q2, while the Ferraris of Massa & Raikkonen scraped by in P9-10 respectively.

And for the final Q3 Qualie session the Top-10 shook out as follows – with Ross Brawn’s Boyz upsetting the Applecart! Since having been fastest all day, it really shouldn’t have been a surprise that the BRAWN’s were the quickest two cars of the Q3 scrum; with ‘JENSE pipping Barrichello by a scant three-tenths of a second, whilst Vettel wound-up in third place.

Thus, you’d haveda admit it was truly a Cinderella story... Paraphrasing Professor Matchett’s words: To go from the brink of INSOLVANCEY – literally shutting the whole operation DOWN & making everybody REDUNDANT... I think Ross Brawn simply cannot believe it!

And to accentuate ‘JENSE’s (Rubino, Ross & the entire BRAWN GP team’s...) accomplishment. Button’s Pole position was the first for a Debutant team since The ‘Wee Scot – Sir Jackie Stewart had done so for the long forgotten March Engineering at Kyalami, South Africa, (1970) in Ken Tyrrell’s customer chassis - an unfathomable 39-years ago... Let that sink in for a moment, eh?

Rubino: The Consummate Gentleman & Elder Statesman.
‘JENSE: The Crown Prince – a wee bit Shell-shocked
Master ‘Zebb: The Court Jester, as that’s what I took away from this trio’s Post-qualifying Top-3 interview.

Thus, it was nice to see some good natured interaction between the Boyz during the interview session with Messer Windsor; as ‘JENSE said laughingly how Zebb had had trouble with the light in Turn-3 the day prior... To which Vettel interjected; Just put some lights in there...