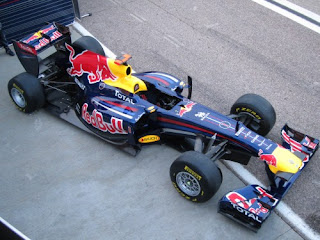 Summary
Obviously, as the reigning Constructor & Drivers World Champions – the target is now firmly affixed to the Austrian Energy Drinks, Adrian Newey and Sebastian Vettel’s backsides. As the rest of the field comes ‘Big Game hunting for them...

For what I can tell, the team returns 99% intact, as the only name I’ve heard of moving on is Neil Martin, who’s become the new head of Ferrari’s R&D Operations Dept. Otherwise Master Zebb (Vettel) now sports the coveted No. 1 plate alongside his ever present Mate Mark “Handlebarz” Webber – whose Not too Bad for a Number 2 Driver, eh? Haven’t heard who’ll ultimately become the team’s Test/Reserve Driver, perhaps the promising Frenchman Jean-Eric Vergne? (Since ‘Aussie Daniel Ricciardo has been confirmed at RBR’s ‘lil Seester Toro Rosso...)

As for the RB7, according to the ultra renowned Aerodynamicist Newey – the two largest areas of change were the repackaging of KERS and the new moveable rear wing. And although the team ultimately chose to campaign the 2009 season without the energy recovery system, nevertheless – they did develop a version of it in conjunction with le Reggie (Renault) and feel they’ll definitely need it this year to ward off the competition.
NOTE
Over the final days of February, there was vast speculation upon le Internetz suggesting that Red Bull would henceforth be propelled by 2.4-liter Normally Aspirated Infiniti V-8 lumps, essentially rebadged Renault’s. As everybody knows that Infiniti is the upscale “Luxury-brand” of parent company Nissan, which is part of the Renault-Nissan alliance, albeit a media blackout upon the subject was supposed to be maintained until 12AM-midnight Tuesday morning.

Yet, the official PressSpeak rollout occurred at the Geneva autoshow where instead it was publically announced that the deal was strictly a branding & technology partnership instead, as the Infiniti moniker will simply adorn everything Red Bull – but NOT the Renault’s valve covers, as the team will still be running Reggie powerplants in 2011. (And most likely 2012 too...)

Hence, it simply appears to be another way of wooing potential customers to a different – more expensive product – as Nissan seeks to broaden its potential to uncork the European marketplace...
Red Bull launches RB7

Red Bull RB7: Launch notes
Posted by Tomaso at 9:22 AM