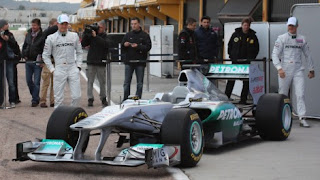 BRAWN GP won the 2009 Constructors & Drivers World Championships prior to being Bought-out by Mercedes – which prior hadn’t competed as an F1 racing team since 1955...

Summary
The legendary Mercedes Benz “Silver Arrows” were last seen in Formula 1 some 56yrs ago – prior to the teams celebrated return in 2010 with somebody named DER TERMINATOR, much to Nico Rosberg’s chagrin. As it was during the 1954-55 Grand Prix seasons that the original Silver Arrows crushed the opposition with drivers Juan Manuel Fangio & Stirling Moss at the controls... Blistering the Formula One world by capturing nine wins and eight poles in twelve races before the ’55 Le Mans Horror saw Mercedes Benz step away from racing.

Mercedes next returned to Grand Prix racing for 1993-94 as an engine supplier with a 3.0-liter normally Aspirated V-10 powerplant for Sauber before switching allegiances to McLaren. (1995-Present) Mercedes has now become a Customer engine supplier to the Woking based McLaren – now its competitor, plus continued supply of its 2.4-liter V-8 lumps to Force India...

And reading between the never ending PressSpeak of New Car launches – as I don’t know what this first historic Mercedes Benz KERS system win was that Norbert Haag refers too... Albeit Mercedes was supplying McLaren’s lumps in ’09 and Haag sez all three Mercedes-runners will utilize the current iteration of KERS this season...