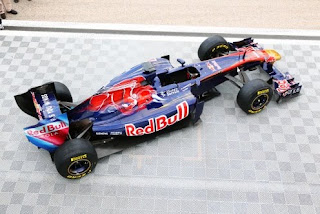 Summary
On the surface, everything appears to be exactly the same as last year, albeit the mandatory changes due to the new 2011 Technical Regulations – with the most notable being the new moveable rear wing flap...

Yet this will be Toro rosso’s inaugural season running the much ballyhooed KERS system, which according to Adam Cooper, the team has opted for its own version vs. Sauber’s purchasing Ferrari’s system off-the-shelve. Therefore the team will begin the season with a modified version of its 2010 Gearbox before introducing a 2011-spec Gearbox unit in Spain.

And reportedly the team has also opted for a radical chassis evolvement from last season, seeking that Uber-elusive “Unfair Advantage” with a unique second floor Sidepod system, harkening back to la Scuderia’s troubled F92A chassis.

The driver front remains the same, with the addition of Red Bull Junior Team prodigy Daniel Ricciardo joining full time as the Test/Reserve Driver and will also participate in limited Friday morning outings, a la Paul di Resta last year for Force India before becoming a fully fledged Gran Primo Piloto this season. As I’m sure that not only Ricciardo, but also Force India’s Nico Hulkenberg wish to emulate Di Resta’s ascension into F1 next season...